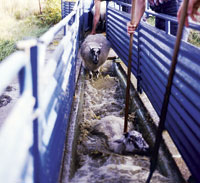 “The concept of a spring/early summer dose is alien to many, as traditionally we have not seen much over-wintering of larvae. However, as winters become milder, over wintering fluke larvae is becoming more of a problem,” he says.

Consequently, a fluke treatment four weeks after turn-out could become part of many routine treatment regimes. “By treating at this time, over-wintered larvae have been given the opportunity to develop into the treatable stage of the parasite.”

And it is important to treat all stock that are potentially grazing pasture, he stresses. “Four to five-month-old calves grazing with their dams are often missed out of treatment regimes, but don’t assume they are not picking anything up from pasture – dose everything where there is a possible risk.”

Most farmers treat in autumn, with a second mid-winter dose common, but with over-wintering fluke on the rise, it is possible farmers will be moving towards dosing animals in autumn and spring, with the winter dose dropping out of the equation.

“Each farm will need to assess individual risk of over-wintering fluke and whether this is the right regime for them, but fluke levels are likely to be high this spring,” he says.

And fluke is becoming a problem across the country, meaning all farmers should be vigilant as to the potential risk of disease. “We cover Hampshire, Dorset and the Isle of Wight – areas not traditionally known for fluke, yet I have seen more cases in the last two years than in the last eight combined.”

And this has been the case for Dorset dairy farmer, Scott Bagwell, Field Barn Farm, Blandford. “We had never had a problem with fluke, but last year we experienced signs of infection in youngstock and freshly calved cows.

“We lost five cows to fluke with a total of 12 showing signs of infection through increased ketosis, milk fever and displaced abomasums.” This resulted in reduced milk yields and added an extra 80 days on to their calving interval.

Youngstock also experienced weight loss, scouring and coughing. As a result, rather than being out-wintered on turnips, stock were bought inside in October, increasing feed and labour costs.

The trouble is, fluke can easily go unnoticed, but it can be under the surface, putting a break on production, explains Mr Coombes.

“For Mr Bagwell, fluke infection became apparent in calving cows last December. These cows would have picked up the parasite while grazing during the dry period and infected livers will have reduced liver function, leading to increased problems at calving.”

Treating young stock in autumn and spring is essential to reduce the potential of fluke infection, says Mr Bagwell.

“With milk price not improving and more stock being put out, alongside wetter summers, minimising fluke risk is even more important. And considering the low cost of treatment, it is well worth it.”

In-calf heifers are now treated twice a year for fluke, yealings three weeks after turn-out and all cows at drying off.

But producers should plan carefully which treatment products to use, says Mr Coombes. “Excessive use of wormers and fluke treatments has created problems with resistance with over use of any one product potentially leading to resistance, so treatment planning is key.”