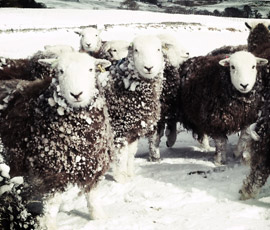 National Trust Wales is urging the public to “think Welsh, think lamb and think local” when they buy meat this Easter – and throughout the year.

The conservation charity, the nation’s biggest farmer, called upon the public to show their support for Welsh meat producers as they face a new crisis brought about by the extreme weather.

It made the appeal in response to the devastating effect of the late wintry weather on the early lambing season.

If the weather does not improve, there would be “shocking consequences” for Welsh hill farmers as many mountain flocks start lambing in the coming days, warned Justin Albert, director of National Trust Wales.

“The snow has claimed huge numbers of sheep and lambs already, but the record rainfall we had last year and the prolonged cold this winter has also had its effect, reducing grazing and hitting flocks across Wales hard,” said Mr Albert.

“Even farmers in the lowland areas of Wales haven’t escaped the effects of the weather despite finishing their lambing seasons, as the prolonged wet and cold has seen many of their animals suffer and significantly increased costs.”

He added: “We can give farmers a boost by buying their produce now, but we mustn’t lose sight of the fact that we should continue to buy Welsh lamb right through to September and beyond when the lamb from hardest hit upland Wales comes on sale.

“Because not only are these upland farmers producing fantastic meat but they also play a significant role in conservation, looking after the environment and maintaining the incredible landscapes of Wales.”

National Trust Wales owns 50,000ha of land in Wales, most of which is farmed by its 240 tenants. Trust rangers in Snowdonia have been contacting tenants in the areas worst hit by the snow over the past week to help wherever possible to rescue animals trapped in drifts.

Andy Hutson, corporate communications officer of EBLEX, the organisation of beef and lamb levypayers in England, said: “The recent severe weather have been incredibly challenging for farmers throughout the UK. We’re sure they will welcome as much support from consumers as possible.

“To this end, consumers should look for assurance marks, like the Red Tractor logo or quality Standard Mark, to do their bit to back the industry.”