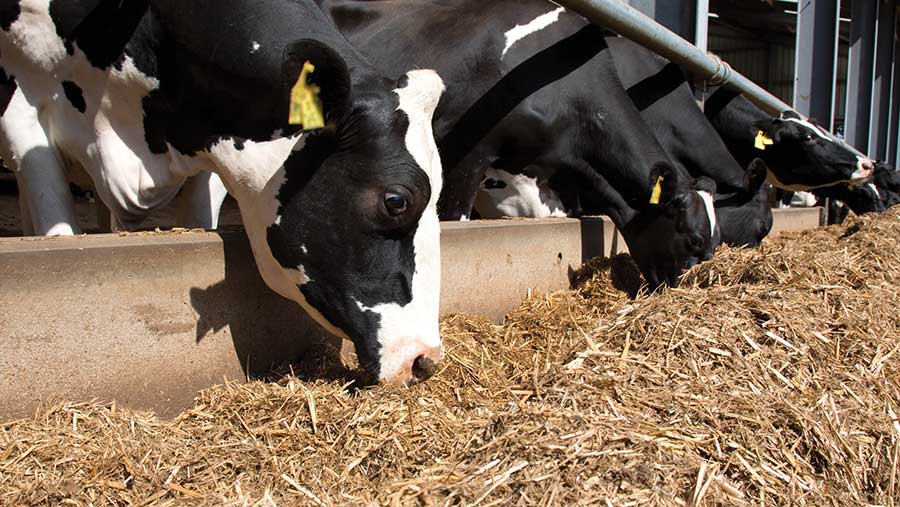 Fat supplements are incorporated into dairy diets to provide energy and enable cows to maintain butterfat levels. Most of those used in the UK are formulated with palm acid oil.

While there is nothing nutritionally wrong with this, palm oil production in general is associated with deforestation and a high carbon footprint.

This caused researchers at Nottingham University to consider if a palm-free supplement could be used instead as a way to lower dairy emissions without hindering performance.

Philip Garnsworthy, professor of dairy science at the university, led the research.

It was funded by Innovate UK through the Centre for Innovation Excellence in Livestock, with Ufac-UK involved as a commercial partner.

“The idea was that we would look at ways of reducing the carbon footprint of dairying, while improving cow efficiency,” he says.

A test fat was formulated by Ufac, using locally sourced vegetable oil – mainly rapeseed – and fish oil, and it was treated to make it inert in the rumen.

It was then combined with a high-fibre carrier to minimise the risk of digestive upsets, which are often associated with liquid oil passing through the rumen.

The control fat was palm-based calcium soap. At the time of the trial the cost/t of the test fat was cheaper than the control fat. Each was included in the ration at the same rate.

The study was carried out on a group of 50 cows, split into two groups of 25. All the cows were more than 50 days in milk at the start of the experiment – just past peak lactation.

They were fed a partial mixed ration comprising grass, maize and wholecrop silages, as well as soya, OSR, molasses, minerals, and fat fed at a rate of 0.5kg a cow a day.

Milking was done via a robotic milker, three times a day on average. Concentrates were fed during milking according to yield, at a rate of 0.45kg/litre above 32 litres a day.

This process was reversed for the second group, feeding the test fat first, followed by the control. Data recording was carried out at week four and week eight.

As the researchers had hoped, the carbon footprint was also vastly improved – both in terms of the feed itself and the subsequent milk produced – when the palm-free supplement was fed, he adds.

The test fat showed a 64% reduction in feed carbon footprint compared with the palm fat:

There was also a reduction in the feed carbon footprint of the milk produced when feeding the palm-free fat totalling 11%:

The feed carbon footprint covers all the carbon emissions associated with growing and harvesting a crop, as well as processing, transportation and so on, explains Prof Garnsworthy.

Compared with the control fat, the palm-free supplement:

In addition, a change in the milk fatty acid profile suggested improved rumen fermentation of fibre, and healthier milk.

There was also evidence that the fat and vegetable oils in the test fat could improve cow health and fertility.

The Envirolac supplement is set to be launched commercially later this year.