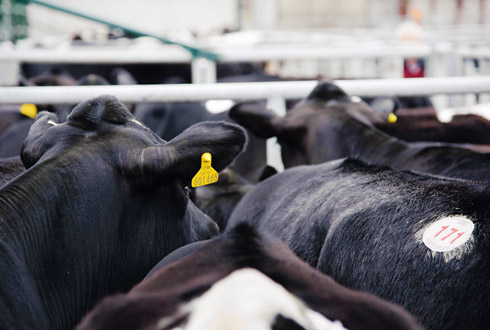 “Best-end stock prices are still very good and I can’t see them easing. If prices do fall, it will be down to the quality of cattle in the sale ring,” she says.

Strong prices are providing producers with a vital source of income as costs of production continue to soar.

Auctioneers also expect dairy prices to hold firm for at least the next six months or so, with the main contributing factor being the continuing reductions in stock numbers from TB.

A recent sale at Leek Market saw a top price for a freshly calved heifer of £2,600 and the average price for the top 10 sold was £2,000. “The best-end second-quality heifers are selling for about £1,900. There’s plenty of demand there for dairy stock, providing the quality is right,” says Mrs Elliot.

And, because demand is set to continue to outstrip supply, both she and the Livestock Auction Association expect prices to remain firm for the time being.

“Commercial bulling heifers have been fetching in the region of £1,000 and pedigree heifers, with more information available than just a date of birth have been commanding considerably more,” says Mrs Elliott.

“Three to four-week-old heifer calves are realising between £250 and £440 a head and those from pedigree herd dispersals are reaching closer to £600 each, with heifers between six and seven months old selling for up to £850 a head.”

Dairy cow prices also remain strong, just as they’ve been for the past three years. “They fell at the end of April due to the drop in milk price, but they’ve rallied since and are holding well. This is despite the milk-price uncertainty during the summer and the wet weather experienced through June and July.”

Cull cow prices also remain strong, with prices close to the record levels seen during the summer set to continue. And, again, there’s more good news because auctioneers expect dairy cull prices to hold firm for at least the next three months or so.

Dairy culls have performed well in the sale ring, with 2011 breaking all previous price records, and this has continued through the first half of 2012 and into late summer, says Symonds & Sampson auctioneer Mark Northcott, from Premier Livestock Auctions in Frome.

Top prices, for the best black-and-white cattle, are still exceeding £1.40/kg liveweight on a typical market day and because demand is set to continue to outstrip supply, the Livestock Auction Association and Mr Northcott expect prices to remain this high.

Auctioneer Huw Evans, who works at the Carmarthen Livestock Centre, says he’s also seeing impressive prices for cull cows in the sale ring. “Many cows are reaching four figures – black-and-white culls are regularly reaching more than £1,100 a head. The average price is between £800 and £1,000.

“And we’re seeing plenty of them at market – between 80 and 150 a week is typical. That said, the supply is still considered to be short – that’s why prices are so strong.

“Trade is brisk – there are many buyers competing to buy cull cows at market. And that’s another reason why even a relatively poor looking cow can still fetch more than £600 in the sale ring.”