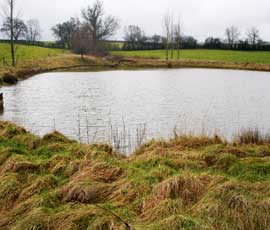 The annual average winter rainfall of 300mm (12in) is fully exploited at Gorsehill Abbey Farm, Broadway, and is saving the business about £2100 in yearly water costs.

Land drains and some building roof water feeds into a 4500 cu m clay-lined reservoir, established in 1999. The harvested water is pumped from the reservoir to a 7000-litre holding tank, which then feeds troughs in cubicle buildings as well as providing water for a high-volume hose used to wash down holding yards outside the 9:18 herringbone parlour.

Organic milk and cheese producer Michael Stacey says demand for water during the housed period means the holding tank is emptied each day. Based on DairyCo industry figures, using 7 cu m of harvested winter rainfall instead of mains water represents a daily saving of £6.60, adding up almost £1,200 over the housed period for the Gorsehill herd of Montbeliardes that yield 5700 litres a cow a year.

In addition, harvested rainwater used through the volume washer (70 litres/min) for an hour each day is saving in excess of £900 when the cows are outside, compared to the current cost of mains water.

To further improve efficiency of the system, a Jobe Topaz Differential valve with a 200-litre-a-minute flow capacity was fitted to the holding tank. Using a weighted float on a cord, when the valve senses a pre-set point near the tank bottom, it runs continuously until the tank is filled.

The valve has removed the uncertainty of the farm’s previous timed pump and cancelled out numerous walks back and forth to check water levels and alter the timer that was situated by the reservoir. For about £130, it’s been a very good investment, says Mr Stacey.

“Using a timer is an inexact science. It seemed like one day the tank was overflowing, wasting water, while the next we had to top it up. Since installing the valve, cows always have ample water to drink post-milking and during housing, while the hose can access uninterrupted water flow at any time. And because the valve is quick to fill, even when the tank is about two-thirds empty, it will replace about 4500 litres within 25 minutes.”

“Wasting captured rain water is costly,” says Mr Stacey, who points out that his rainwater harvesting system doesn’t represent “free” water. Industry figures suggest a cost of 17p to 45p a cu m for collecting, storing and pumping water. While creating a clay-lined reservoir today would cost in the region of £5-10cu m.

“But this still represents a large saving on my current mains water charge of about £1.36 a cu m, and since installation, the reservoir has more than paid for itself.

“Adding the differential valve has also helped reduce electricity use, and by stopping intermittent pump operation, it will extend the life of the electric pump,” says Tim Evanson of Dairy Spares, Shropshire.

Mr Stacey adds: “I could divert all of my building roof water to the reservoir, but I don’t need it.” However, gutters and down pipes divert clean water away from the yards and the farm’s slurry stores. This has helped meet the minimum NVZ five-month storage requirement for the 80-cow herd and saved a further £1 a cu m in disposal costs for dirty water.

“I believe farmers should be encouraged to re-use winter rainwater and that reservoirs provide an ideal solution where the soil type allows. Planning authorities and external funders should be supportive.”

Mr Evanson reports increased interest from farmers also looking to make the most of their roof water. “Collecting into holding tanks is made simple by fitting a Part Fill valve, which prevents tanks running dry during low rainfall as Part Fill valves can call upon an alternative water supply.”