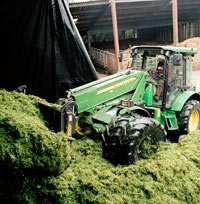 Farmers should consider digestibility and wilting rates when harvestting second-cut silage in an effort to make the best of a tough season, says Dave Davies of the Silage Advisory Centre.

“Farmers are facing grass shortages, with first-cut silage yields low due to the slow spring and a low second cut due to the dry summer.

“Keeping a close eye on grass maturity is key because, when overall yields are likely to be low, it’s vital to produce silage with optimal D-value and ME content,” he explains.

“Digestibility of forage is also crucial in terms of maximising productivity from a winter silage ration.”

And when farmers want high-quality silage, they would be wise to take a hit on yields, rather than delay harvesting. “Leave it too long and you will end up with poorer-quality forage as well as reduced grass growth following the harvest, which will lead to an even lower annual yield.”

Wilting times should also be adjusted to take account of lower yields, according to Dr Davies, who guides against wilting too long: “Lighter crops dry much more rapidly, and clamp silage with over 35% DM can lead to aerobic spoilage if the system is not used to dryer silage,” he says.

“Alternatively, big-bale silage has a wider dry-matter window and is unlikely to spoil when harvested bales are managed correctly.”


• More advice on silage harvesting and use at www.silageadvice.com,