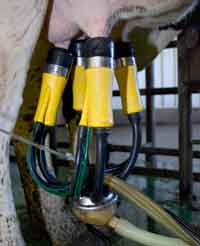 Teat preparation prior to milking can have a huge effect on teat condition, milking time and yield according to WestPoint Vet Groups Keith Baxter speaking at an udder health symposium, Petworth, West Sussex.

“Slapping on the milking unit in a bid to save time won’t pay off because stimulating the teat is one area that can have a huge effect on udder health and can potentially impact teat end damage,” he said.

And speaking to visitors at Hurlands Farm, Mr Baxter recommended the stimulus should be 20-30 seconds a cow, with the ideal time from prepping to putting cups on 60-90 seconds.

“When cups are put on straight away without any stimulus you would get a little stored milk released from the cistern, but it takes about 60 seconds following stimulation for the hormone oxytocin to be released in to the blood and to influence contraction of cells in udder.”

So when teats aren’t stimulated the teat could end up having suction applied without milk coming out, which is a big problem, he explained. “This could potentially damage teat ends, and it also means milking could take longer because when you don’t stimulate the teat you get little milk let down initially, which also means the cows are subjected to the vacuum for longer.”

But using a milk flow device called a Lactocorder gives a valuable insight in to milk letdown performance, he said. “We have used this device on client farms and when teats haven’t been stimulated, instead of getting a rapid peak in milk let down before a decline, we have seen a slow rise in milk let down, with less of a peak, with milking also extended by several minutes,” he said.

And considering your parlour routine is an important step in the control of udder health problems and specifically mastitis, added vet Rob Drysdale. “Eradicating mastitis completely is probably not possible which is why it is about control. Looking at your parlour, knowing your enemy in terms of bacteriology and keeping records and monitoring results are all important in the control stage,” he said.

But steps can be taken to control mastitis. “Reviewing farm data such as cell counts and milk records can give clues as to the source of the problem,” said Mr Drysdale. “For instance when a peak of mastitis occurs in the first few days after calving then it is likely to be a problem with the environment, particularly the environment in late dry period. However, 10-14 days after calving then a milking machine problem is more likely,” he said.

Records from bulk tank are also valuable because they can identify herd level issues and can pre-empt problems, added Mr Drysdale. “However, better records of clinical cases such as quarters infected, severity and treatment records give a good indication as to how effective treatment is in terms of clinical signs and cell count. And this is why it’s important to freeze samples so a history can be built up.”

And getting to the bottom of why cows are getting mastitis is important. “You can keep culling high cell count cows, but if you never get to the bottom of the problem then you are merely just placing with cows that are going to get mastitis.”

Deciding what to do with high cell count cows is also important, said Mr Drysdale. “Options for cows with mastitis include culling at the end of lactation, drying off early or treating in lactation. Particularly with heifers it’s important what option is taken as repeatedly tubing heifers can damage the teat end and increase the likelihood of them getting re-infected.”