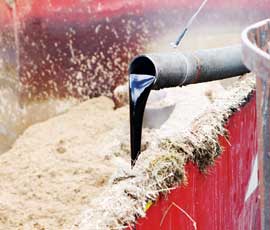 With 22% of the crop harvested, crop condition estimates have now been increased to 35% good-to-excellent.

But the fall in prices was as much influenced by outside factors. The improved news on yields caused a slight dip in the market which combined with continuing nervousness over poor economic growth in both the USA and Europe to produce a substantial investment fund sell-off.

It’s a typical response that chased prices down further than the fundamentals of tight supply versus strong demand would appear to warrant. Those issues are still present, so there remains a chance the market will rebound at some point, and potentially quite sharply. Any indication that prices have bottomed out could see the funds quickly re-enter the market for another bout of profit-making.

It’s still too early to know how much extra tonnage will come from the US soya bean harvest compared to predictions. The corn harvest also started off better than expected, then rapidly deteriorated as more of the crop came in.

More importantly, any extra volume will be easily absorbed by the market and is unlikely to have any real effect on the overall position. The fundamentals haven’t really changed, there just happens to be slightly better short-term harvest news.

The rainy season appears to have started in northern Brazil, so soya bean planting is expected to start during the next few weeks. Any longer-term respite from recent market highs probably hangs on a bumper South American crop, though if the crop gets off to a poor start, any current lows will quickly reverse.

Treat any fall in values as an opportunity to secure additional contracts for the winter and give serious consideration to cover for at least part of next summer’s requirements, in case the South American crop falls short.

Rapemeal continues to follow the soya bean meal market, but the general lack of availability has resulted in a slower fall.

Rapemeal is still good value in comparison to soya bean meal, so is holding its value and looks set to continue doing so. Home-produced distillers’ feeds are starting to become available from the restarted Ensus bioethanol plant, but prices are matched to the current market and initial volumes aren’t expected to do much more than help meet current high demand.

For energy feeds, the overriding effect of poor corn yields and falling cereal harvest predictions in Europe and Russia continues. Pressure from fund selling and the falling soya bean market did cause corn prices to drop – and further than soya beans – but the same fundamental problem of tight supply and high demand is likely to eventually reassert itself in the market.

UK wheat forecasts have now been revised downwards to 13.8m tonnes compared to 15.3m tonnes last year, and overall EU and Russian wheat stocks are predicted to fall by 30-40% as a result of the poor harvest and demand.

Russian wheat prices remain strong as speculation continues over whether export restrictions will be imposed again this year, and there’s also news of Australian wheat crop estimates being downgraded due to lower-than-average rainfall through September.

With no real improvements in the weather outlook on the horizon, a below-average Australian wheat harvest would see the pressure on energy feed prices continue into next year. For UK livestock farmers there are also significant challenges with regards to feed supply, with many of the popular alternative and co-product feeds now sold out for the winter.

Once again, it’s the liquid feeds that remain one of the best-value options, with prices driven by a different set of factors than those affecting traditional dry straights. For both energy or protein supply, liquid feeds should be high on everyone’s list this winter given the lack of available alternatives, especially where moist feed supplies are short.