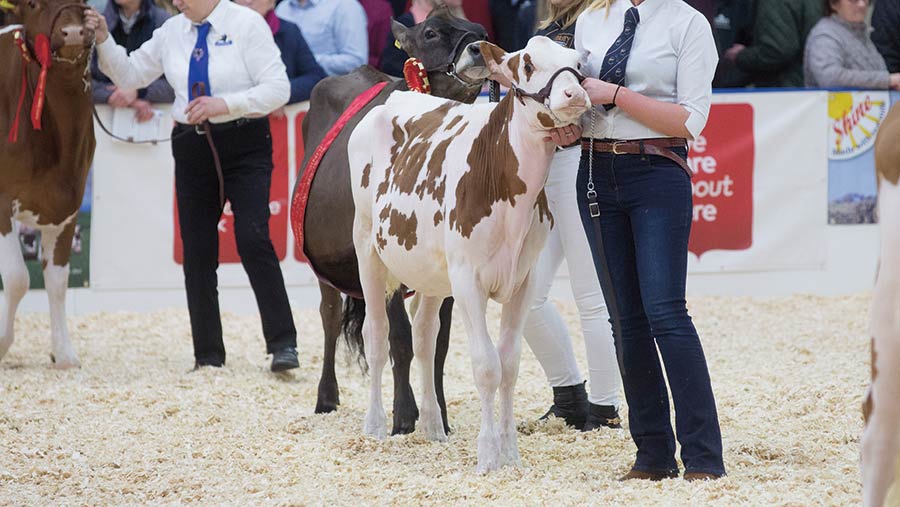 There is a lot to think about in the show ring, and a lot at stake.

Whether it’s your first or fiftieth time stepping into the ring, there is a lot to remember – keeping your eyes on the judge, walking in time with your calf and getting the calf set up perfectly to show off your prized animal.

Watch the video and read the 10 steps below.

The calf needs to be the right size for the handler. The handler should be able to see over the calf’s head, but not be too small or the calf and handler will not look balanced. Having a calf that is too big will make it harder to handle.

When using a rope halter, it is important to get the calf used to wearing the halter and being tied up.

Once the calf is used to being tied up on a halter, the handler should start training the calf to walk on the rope halter. Once the rope halter is no problem, a leather halter can be used, which is what would be worn in the show ring.

TOP TIP – The metal ring on the halter should sit halfway between the eye and the nose. The clasp should fasten on the outside, so it is not digging into the calf’s jaw and the halter strap should be rolled up in the showman’s hand so it looks tidy.

See also: How to clip and prepare a calf for the show ring

Each breed society has a different uniform for the ring, so find out what exhibitors should wear in terms of shirt, trousers, belt, boots and tie for the breed you are showing.

For Holstein exhibitors, this should be white trousers and a white shirt, with boots and belt of a matching colour and a Holstein Young Breeders or Holstein UK tie. Shirts should not have rolled-up sleeves, should be tucked in and fastened to the top button.

When you first enter the ring, you should walk forwards at a relatively quick pace, as all the exhibitors are coming into the ring at this point. Your feet should move in unison with the calf’s front feet, at the same pace and putting the same foot forward.

5. Showing once all exhibitors have entered the ring

Once the last exhibitor is in the ring, you can turn around and walk backwards, still leading your calf in the same direction, but positioning yourself at an angle where you can see your calf and the judge at all times. As the judge moves around, you adjust your position slightly so you can still see the judge and the calf.

The calf’s head should be held nice and high, with a good, straight line from the top of the calf’s head, down through the nose and to the exhibitor’s elbow.

It should be a natural position, not too high with the nose in the air and not too low.

7. Know the stop and walk on signals

There are signals that tell all exhibitors in the ring to stop and then walk on:

There are also signals for one exhibitor to stop and then walk on:

Stop – One hand raised, looking at a particular exhibitor

8. Setting the calf up

Firstly, the feet must be set up when stopping to show your calf.

The back leg nearest the judge should be slightly further back to make the calf look longer. Again, the front leg nearer the judge should be a fraction in front of the other front leg, with a nice distance between them. Some judges don’t mind handlers using their feet to nudge feet, but some prefer exhibitors to use their hands.

TOP TIP – The judge will stop the exhibitors several times to test how well and how quickly handlers can set up their calf. So, it is important to practise and get the calf used to your instructions for set-up, to make it a smooth process.

Once stopped individually, you should set your calf up as quickly as possible and the judge will approach to inspect the calf.

The judge will feel the calf’s ribs and at this point the handler should turn the calf’s head away from the side the judge is on. This is to stretch the skin over the ribs to make them more clearly visible.

The judge will then pinch the skin to feel the dairyness of the skin – at this point, you should turn the calf’s head back towards the judge.

The judge will then view the calf from the front. At this point, you should stand to the side of the calf’s head, leaving a reasonable gap between you and the animal, so that the judge can see down both sides of the calf.

As the judge moves to the other side of the calf, you need to switch the legs, so that the legs nearer the judge are further back on the back leg and forward on the front, to show the full length of the calf on that side.

The judge will then move to the back of the calf and at this point it’s important to keep the calf in a straight line.

Once the judge has finished their inspection, they will tell you to move on. The walk on should be as straight and smooth as possible.

10. Understanding placings in the line-up

When told to move to a place in the line-up, a steward will guide you into the initial place.

Setting up your calf in the line-up

If you are in first place, you will be standing at the top of the line. This means you should set the calf up to be viewed by the judge from the side where there are no other calves.

Moving position in the line-up

If you are moving from first place to another position, you will lead your calf forward, peel off to the left, walk around the back of the line-up and move into the new position. 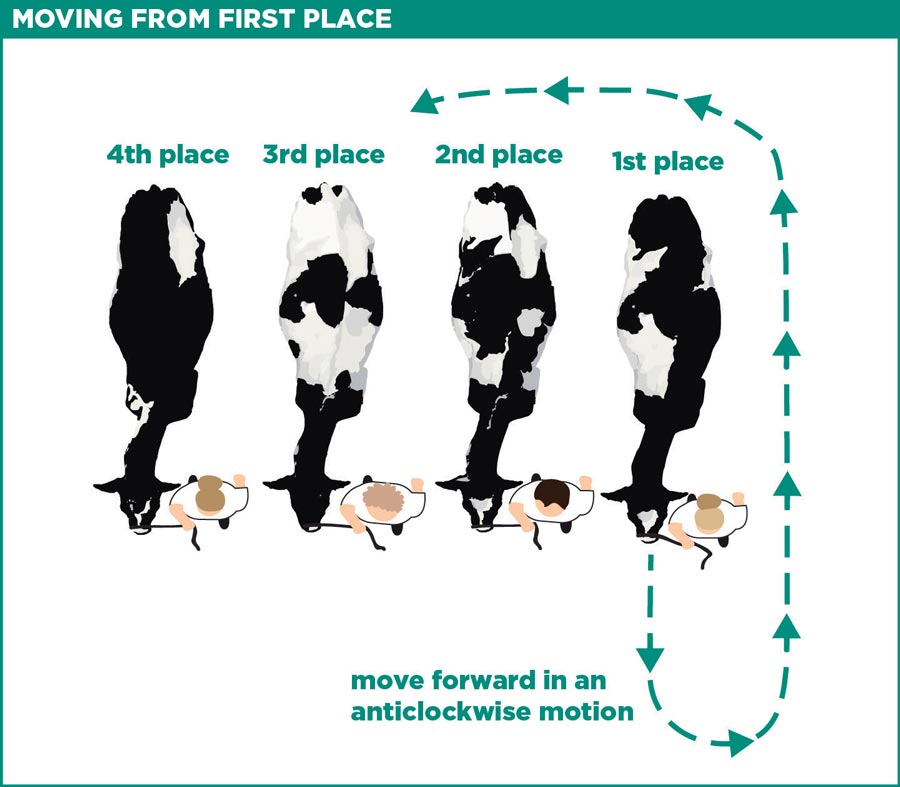 If you are moving from another position, you will walk forwards and turn 360deg in a clockwise motion, walking back through the space you were in, then behind the line-up and into the new position. 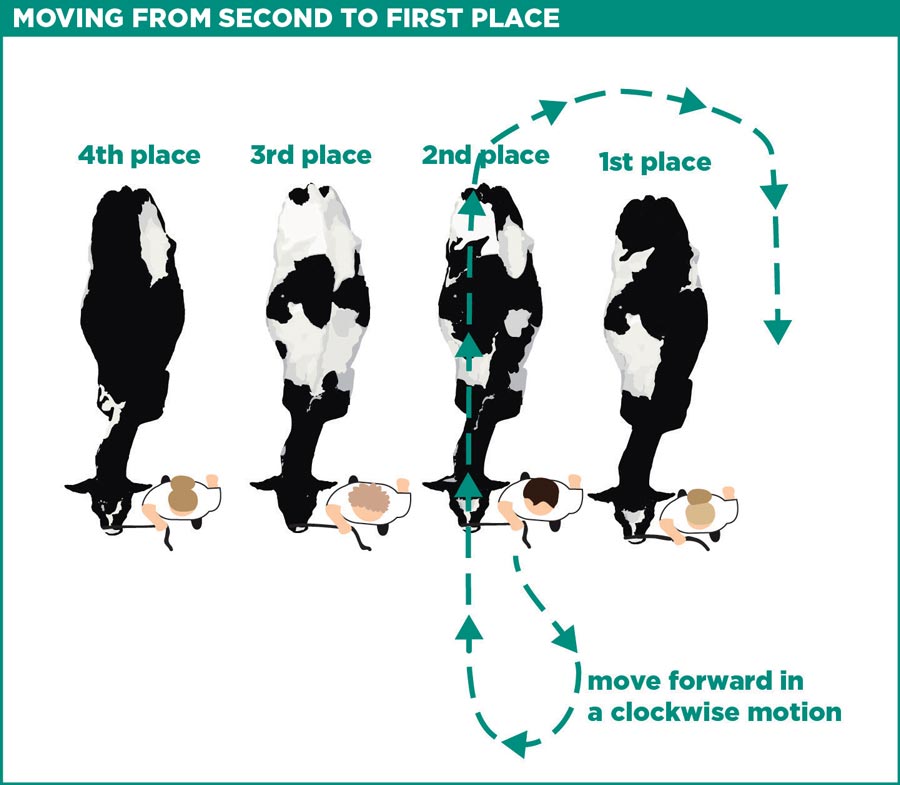