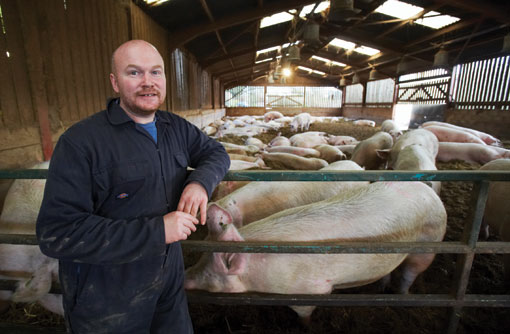 Wheat was harvested on 7 September at 14% moisture, about 70 bushel weight and 2.7 tons to the acre – so with spot prices at £190 plus a tonne, it’s a bitter sweet moment when I will sell it, as I buy far more than I produce.

The straw was not too bad considering the amount of rain it has soaked up. We are now going to fence around our largest field and let the sows go over it, as about half an acre was too wet under tyre to combine. One way or the other I will get some benefit from it.

The pigs are doing well. During August at the finishing unit we had a record low mortality, with only four out of a constant 1,100 pigs being lost.

At the breeding unit we have had a zero farrowing week as, this time 16 weeks ago our new farrowing containers arrived, meaning we did not have to wean that week and had nothing to serve, hence 16 weeks later nothing to farrow. This ultimately means in another 160 days we will have nothing to sell, so the affects of the fire we had in February 2012 will be affecting my business nearly a year later.

Herds of pigs are being dispersed now across the country due to high feed prices, hence the forecast drop in numbers going forward, but can we get people to listen to this further up the production chain, to pay a fair price now to prevent this happening? Not a chance.

Andrew Freemantle farms 300 sows near Exeter, Devon. He sells 130 pigs a week, with 85 going to abattoirs and the rest supplying their own enterprise. Andrew was 2008 Farmers Weekly Pig Farmer of the Year