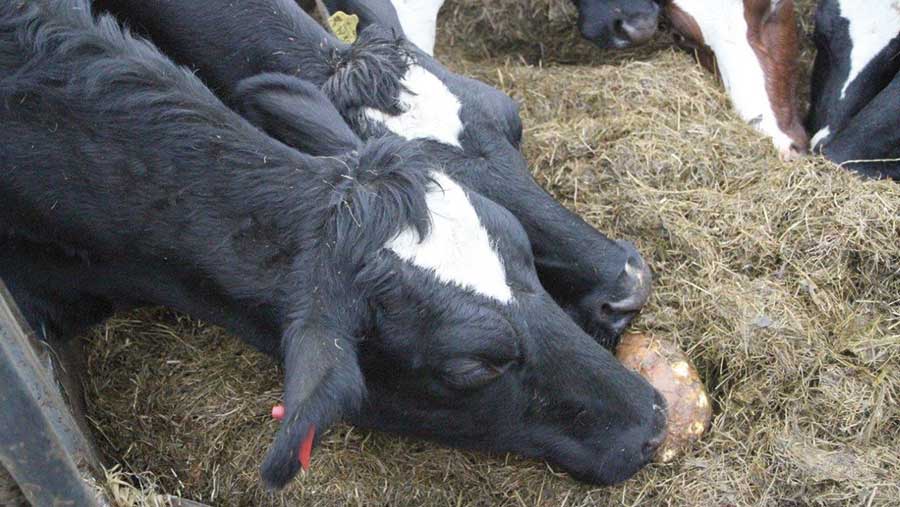 A dairy farmer in west Wales has decided to include fodder beet to the ration of his milking cows to lift the energy levels and avoid cows experiencing negative energy balance.

The farm relies heavily on grass, with a Friesian-based mixed-breed herd that includes Danish and Swedish genetics, selected to produce robust grazing animals.

Last year he noticed a slight dip in fertility, which he put down to the cows milking well and experiencing a period of negative energy balance.

As a result, he decided to include more energy in the winter ration particularly because the nutritional value of the diet relies heavily on silage quality, which can be variable from year to year.

“For us, adding cereals to the diet to boost energy wasn’t really an option because we operate a basic feeding system without the need for a feeder wagon.

“Additionally, we are prone to starling infestations, which eat the feed and spread disease,” says Mr Adams.

This led him to explore alternatives and, with the help of OMSCo, he teamed up with an organic arable farmer to source the crop, which he says also compares favourably with cereals in terms of cost.

“I’ve always wanted to try fodder beet but didn’t feel I had the technical skills to grow it under organic restrictions.

“So when I saw that OMSCo had initiated a partnership with an organic grower in the eastern counties, I was really keen to be involved. The scheme has enabled me to source 120 tonnes of beet this winter.

Mr Adams says the benefits are twofold: “Not only do I now have a highly nutritious British-produced organic feed that complements my forage based ration, it has also enabled me to keep my grazing land entire – which is very important for my system.”

Milking cows have been fed 3kg/day of fodder beet since mid-November and Mr Adams has been very pleased with its addition to the ration.

“Fodder beet has slotted in to our system very well. It’s easy to feed and the cows love it. Apart from washing, it doesn’t require any processing and is fed whole, being tipped up on top of the silage in the troughs.” 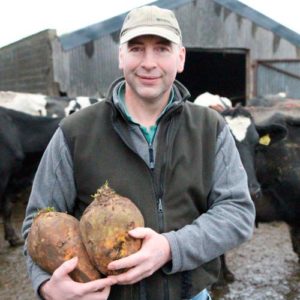 Although it’s too early to say whether fertility levels have been upheld this year, one thing Mr Adams has been very pleased with is its effect on milk quality.

“Previously, we have noticed that milk butterfat and protein levels have declined, but we have actually seen levels maintained with protein at 3.3 and butterfat at 4.5.

“Whereas typically at this time of the year, it would sit around 3.15 and 4.3 for protein and butterfat respectively.”

He expects that overall cow health will also benefit over time, and with high levels of herd health fundamental to his business success, this will be of significant value.

“Fewer than 20 cows in a herd of 340 have required antibiotic treatment for mastitis during the past year, with cows that do require treatment moving out of the milking herd.

“This is something we are very proud of and can be attributed to attention to detail, vigilant stockmanship, and a holistic approach to health.”

OMSCo is looking to expand the scheme for this year, explains head of technical Peter Savidge.

“Overall, the fodder beet scheme, which is in its first year, has worked very well. The biggest challenge has been hauling it from the eastern counties, which adds to cost.

“We are actively recruiting more arable farmers in the North, the West Midlands and the South West to increase supply and reduce the distance for haulage.

“With 4,500 tonnes of beet already pre-ordered by our members, the initiative is going from strength to strength and we are also reviewing the possibility of widening it to other fodder crops.” 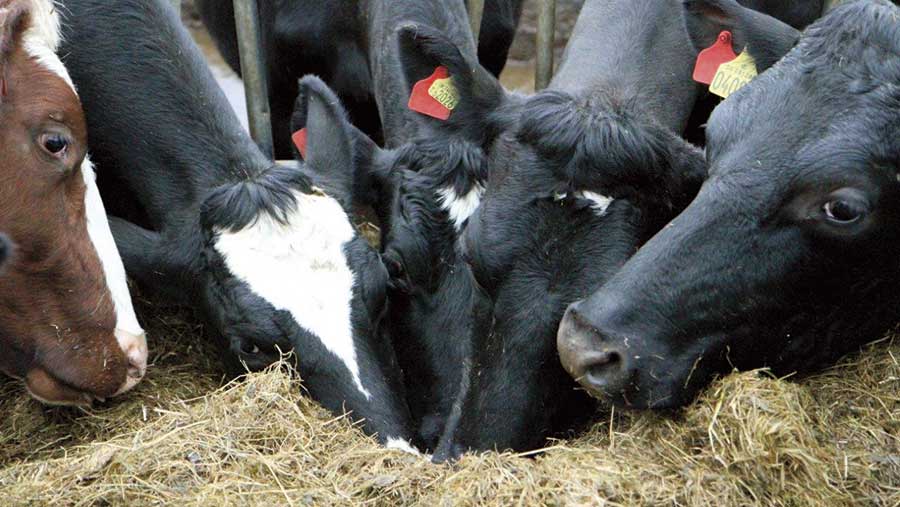 According to dairy nutritionist Tom Tolputt from South West Farm Consultants, fodder beet can be a very good addition to dairy rations.

“Fodder beet is nutritious, very palatable and can improve cow intakes along with milk production and fertility.

“Not only is it an excellent source of energy, it also contains plenty of carbohydrate.

“Carbohydrate is a very important component of the diet, as it helps feed the rumen microbes, promoting rumen health and function, which is fundamental to achieving high levels of feed efficiency.

“While it can prove a very useful tool in compensating for shortfalls in silage quality – which is a particular challenge in organic systems such as the one Mr Adams operates.

It can also help to reduce the need for high levels of cereals in rations, which can be detrimental to rumen health.