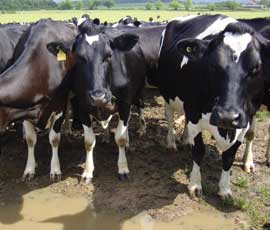 Farmers are being urged to assess pastures now for sward damage and to take immediate action to repair swards in order to prevent problems next year.

Continued wet weather throughout the summer means compaction in the top soil may be particularly bad in some fields, said the British Grassland Society’s George Fisher.

“Although there have been a few dry weeks and some soil is starting to recover, medium to heavy soils are still likely to be compacted,” he said.

“It’s important to dig a hole one to two spades deep and determine whether compaction is a problem. Soil aeration can help eradicate compaction at this level, but when compaction is lower down subsoiling/sward lifting is needed. However, when soils are too wet it could cause more harm than good,” he said.

Mr Fisher said doing nothing was “not an option”. “The kind of poaching and damage we have seen this year may make it difficult for swards to recover. Where ground has been covered in nothing but water you may need to consider ploughing the land up and reseeding.”

Sward damage could also lead to weed problems next year, Mr Fisher warned. “There could be a carry-over of problems from this year in to next year, that could compound grassland use, so action is key, as well as being flexible.”

“Bare soil is an open invitation for weeds such as meadow grass and broad-leaved weeds such as seedling docks. Filling the gaps with productive grass plants now will protect quality and yields for next spring,” he said.

Overseeding is one option for patching up badly-affected areas and is cheaper and quicker than conventional cultivation and reseeding, according to Rod Bonshor, general manager for Oliver Seeds.

“Work pressure on most farms is massive at the moment, so rejuvenating grassland may not be top priority. However, those that make time to squeeze it in will really benefit next season. But the sooner the better – certainly for those in the North, where the season will start shutting down very soon.”

Mr Bonshor said mid-October was the latest most farmers in the midlands and south of there should be trying to introduce new grass seed.

For farmers thinking about overseeding seed-to-soil contact is essential, with grazing down or taking a late cut of silage immediately beforehand advisable. Rolling the field afterwards will also help. If sward conditions allow, light grazing with sheep for eight to 10 days after this will defoliate the existing sward and encourage seedling grass growth, said Mr Bonshor. “Take the sheep off immediately after new seedlings are seen to avoid physical damage.

“Overseeding always works best with large seeded varieties such as tetrapolids, as these establish and grow fast, competing aggressively against the existing grasses,” said Mr Bonshor.

Grassland issues have been a major talking point with the Farmers Weekly Farmer Focus writers. Catch up with their grassland highs and lows on our Farmer Focus page.