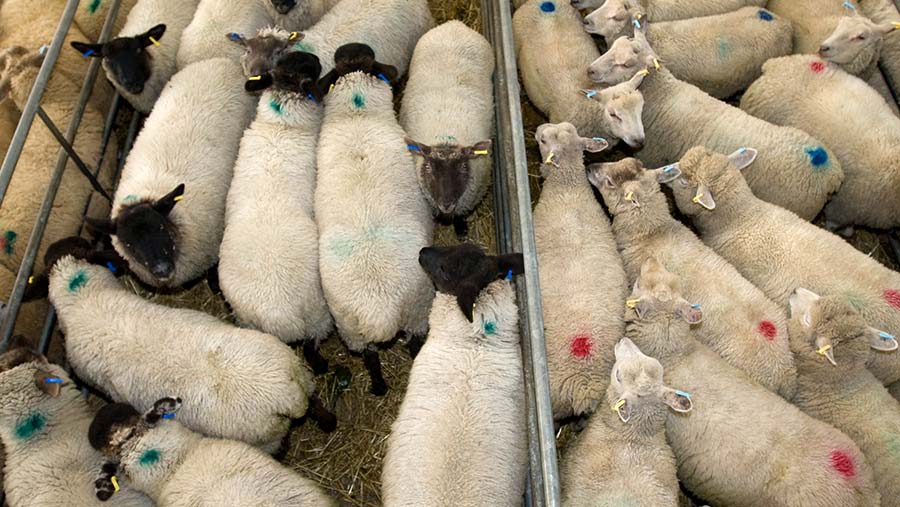 Nervous early store lamb sales have been firm and, at times, ahead of last year’s drought-hit August trade, with auctioneers thanking timely rains and market confidence.

Buyers and sellers have entered into store lamb sales with trepidation ahead of the Brexit date (31 October), which could see a 40% tariff put on lambs.

However, marts have reported longer-keep lambs at £50-£55 and more, with many hoping the tight New Zealand and Australian supply situation will stoke demand for British produce.

Throughputs of store lambs are up 40-50% at Hereford, where auctioneer Greg Christopher says the impending Brexit deadline has prompted farms to market store lambs earlier.

He said anything well-bred and short-keep is making at least £60, adding that the longer-keep lambs were still hitting £55-£57.

“I’m surprised at the trade to be honest, especially with the numbers we’ve had,” Mr Christopher told Farmers Weekly.

He added: “The 31st of October is at the back of everyone’s minds. We’re seeing producers who would normally sell in the prime ring sell as stores instead.”

Longer keep lambs have been around the £50-mark at Sedgemoor, where auctioneer Paul Ashton and the team have reported good demand for small, well-bred lambs.

“I think people who are in the sheep finishing game are willing to take the rough with the smooth,” said Mr Ashton. “People are looking to pay less for them, but not always managing it.”

He said some buyers were hopeful that with Australian and New Zealand lamb supply being tight, British lamb could remain competitive after Brexit.

In Cockermouth, John Wharton, livestock manager and auctioneer at Mitchells, said grass availability was keeping trade firm for both long and short-term lambs.