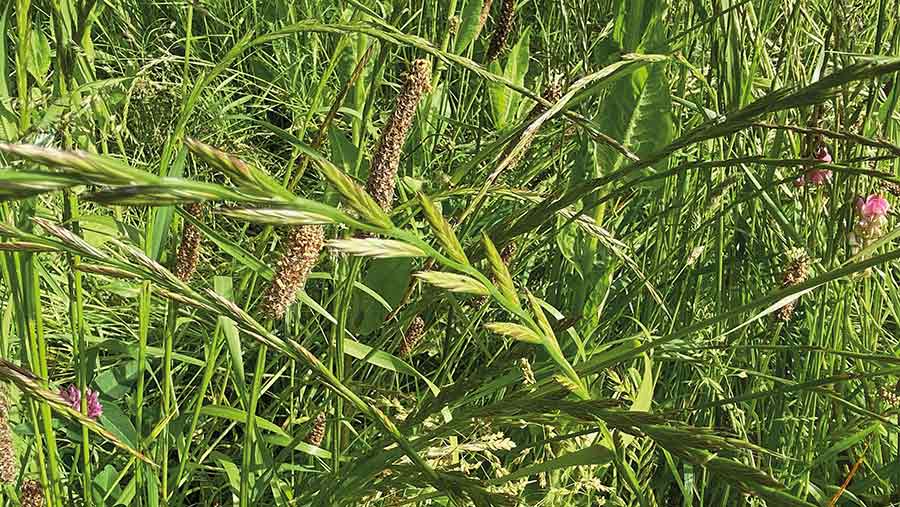 Herbal leys have sparked a lot of interest from livestock and arable farmers alike, she says.

“There’s so much good they can do, it’s hard to know why you wouldn’t want them.”

However, knowing how to establish them successfully is a barrier to some farmers, especially without ploughing.

“The key message from farmers [we’ve worked with] is that establishment is the challenging bit, but it’s all up from there in terms of performance.”

At a FABulous Farmers masterclass on mixed crops for forage, Miss Still offered some pointers.

You need a plan, but you also need to be opportunistic.

Timing is critical for good establishment, with warm and moist conditions. Soil temperature needs to be a minimum of 8-10C. Prolonged dry periods have caused some spring crops to fail, and farmers have had more success in the autumn.

Broadcast is best, followed by rolling. If drilling, depth needs to be no deeper than 10mm, or seeds will be lost. Soil contact is more important than depth.

Either way, you need a fine seed-bed, as the seeds are small.

Undersowing in arable crops or arable forage crops is another option, and direct-drilling has also been successful.

Herbal or multispecies leys can be anything from three to 30 or more species, but you need a minimum of six different ones to get a range of functions.

Reseeding gives more opportunity to include finer seeds in the mix. With overseeding, you can take advantage of damage to the ley by poaching, for example, but you need to be more selective with choice of species.

It’s best to go for, say, six more robust species that will compete with the existing grasses, such as chicory, plantain and white clover.

You can’t use herbicide on a mix of grasses and broad-leaves, so really think about your dominant weed species and sow at the opposite end of the season to when those weeds are coming up.

Autumn-germinating weeds include blackgrass, barren brome and wild oats, while black bindweed, fat hen and redshank come up in spring.

If you have oversown or stitched into an existing pasture, protect the seedlings early in their establishment by letting livestock in to graze for four or five days to knock the existing grass back, and bring them out again as soon as the seeds start to germinate.

Herbal leys respond very well to rotational (or mob) grazing at high stocking rates, and to long recovery periods of at least 30 days.

Leave a minimum 7-10cm residual, be very careful not to overgraze, and move cattle on rapidly so they can’t graze selectively.

Aim to keep a sward for at least four or five years. If you get the grazing right, you will maintain diversity. 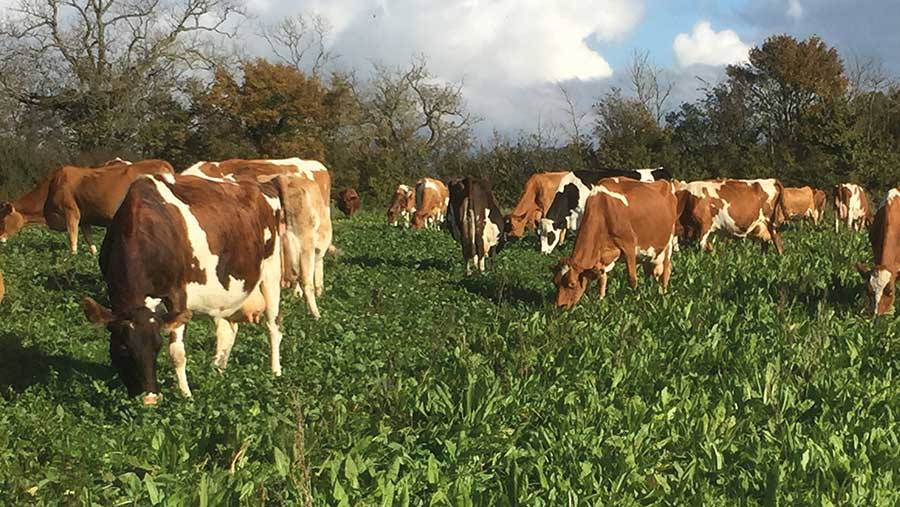 The aim was to mitigate against drought, improve production and soil health, and benefit animal health and performance.

“Even our heavier land is fast to burn out,” he says.

He started with a simple mix of chicory, plantain, ryegrass and white clover.

“That first mix performed very well in the drought of 2018 – the ryegrass stopped growing, but the chicory and plantain carried on,” he says.

He sowed the farm’s first full herbal ley, with 17 or 18 species, in spring 2018. More have been added each year, and there are now 43ha (105 acres), with a further 16ha to be seeded this autumn. The aim is to replace all the ryegrass leys with herbal ones.

The most successful crops have been from autumn sowings following ryegrass.

1. Pull field after second cut of silage in mid-June by shallow-cultivating
2. Repeat shallow cultivation three to four times for effective germination and kill
3. Roll with Cambridge rolls to give firm seed-bed and stop seeds going too deep
4. Sow with grass harrow and air seeder in August
5. Roll again with Cambridge rolls to break up any lumps of soil
6. Flat-roll to give a tight finish for good soil-to-seed contact and to conserve moisture
7. Shut the field gate until the following spring

Some herbal leys are also sown in the spring to spread risk and minimise the area out of production at any one time – the establishment phase is longer on an organic farm, and herbal leys take at least 12 weeks to establish compared with six to eight weeks for ryegrass ones.

Once established, the cows go in when the ley is at “wellie height” – plate meters are not particularly accurate for herbal leys, says Mr Hutchings – at a target of 4,000kg dry matter (DM)/ha, and graze the herbage down to a residual of 1,800kg DM/ha.

The system is flexible: if the cows have left a lot after a morning’s grazing, they are moved to a smaller area in the afternoon; if they are hungry, they are allocated more.

“The herbal leys produce more forage than the ryegrass leys – this year they are 30% ahead,” he says. “And the benefits multiply over time – the herbal leys are getting fed more by the cows’ dung and urine each time they graze them.”