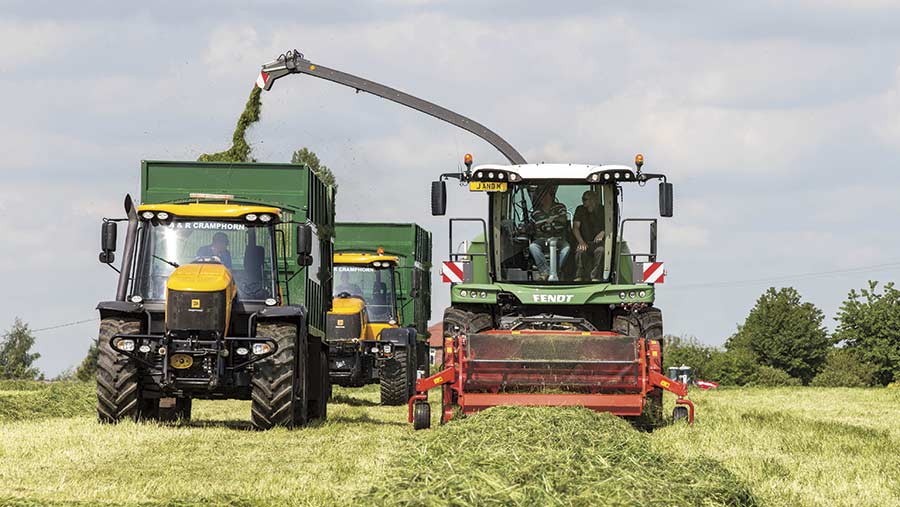 In the second part of our series on how farmers can lift milk solids production, Aly Balsom speaks to a Danish farmer to find out how his multi-cut silage system benefits his 350 cow herd, which yields 11,000kg at 4% fat and 3.4% protein.

The ability to raise forage levels in the diet and reduce the amount of concentrate fed is the main benefit of producing high-quality silage from a five cut system, says Jacob Holst Andersen.

“I aim for 55-60% energy coming from silage [in the total diet]. It’s something I can produce myself and the better quality I make, the more silage I can get into cows and the less concentrate I need to buy in,” he explains.

See part one of the series: Benefits of switching to a multi-cut silage system

Mr Holst Andersen and his father-in-law, Jens Hansen, who farm Enghavegaard in Denmark, moved from a four to a five cut silage system about 10 years ago.

They immediately saw an uplift in silage quality, with D value increasing by about two points to an average 77-78. Protein levels also rose by about 0.5-1% to the current 15-16% average with peaks of around 22%.

This improved quality has helped the business to cost-effectively increase yields by about 2,000kg/cow/year over a decade, with genetic selection also playing a role.

The diet is now made up of 65% forage on a dry matter basis, which Mr Holst Andersen believes is beneficial to rumen health and performance.

He explains: “The more silage you can get into cows, the better it is for the cow as it reduces the risk of periods of low pH in the rumen, which can reduce dry matter intakes.” A more stable rumen also benefits milk constituents.

Many of Mr Holst Andersen’s neighbours choose to take six cuts a year to produce even higher quality silage – although total annual yields are similar.

However, he believes a five cut strategy fits better with his system and that all farmers should choose their silage strategy based on their individual requirements.

“I don’t need such high energy as I have maize in the ration and I would rather have structure so I don’t need to feed straw,” he explains.

The area of North Jutland, where Enghavegaard is located, has low annual rainfall of around 800mm.

The area can also be cold, with evening temperatures of between -2C and 5C in May, so first cut is not taken until around 20 May.

The first cut will typically yield about 35-40% of total annual yields. This could be increased to 45% by cutting slightly later, but Mr Holst Andersen opts for quality.

“I’d rather get higher quality. The higher the quality, the higher the yield of the cow and it’s also easier to get the dry matter you want on a lighter cut. And any lower yields at first cut will be made up for in the following cuts,” he explains.

A contractor is used for all cuts. As first cut is the highest in terms of yields, a forager is used for speed of harvest. Two forage wagons then harvest the remaining four cuts to reduce costs.

At 10cm, the chop length may be longer with the forage wagon versus 4-5cm with the forager, but because grass is younger, Mr Holst Andersen believes it is not detrimental to intakes.

All silage is wilted for 24 hours to achieve an average dry matter of 30-35% for optimum digestibility and intakes.

He recognises that harvesting costs are higher on a multi-cut system, but believes they are more than made up for in quality.

“If we weren’t doing what we’re doing with silage, the level of energy [in the total diet] from forage would probably be 50% rather than 60%… In total, it’s a little more expensive [cutting more], but it probably equalises as you get better quality and protein and that’s where you make the money.”

Danish winters can be harsh so if nitrogen is left in the soil over winter there’s a risk of grass die off. As a result, all fertiliser is applied at the start of the season at Enghavegaard.

Early season grass will also give the best response to nitrogen, while clover will provide nitrogen at the end of the season. In Denmark, farmers can apply a maximum of 280kgN/ha/year on silage ground that includes clover.

Fertiliser considerations on a multi-cut system

A “little and often” approach to fertiliser application is the best strategy on a multi-cut system, says independent grassland consultant George Fisher.

As a five cut system produces a similar volume of silage through the season versus a three cut system – but at higher quality – Dr Fisher says total fertiliser requirements will be the same.

“You can keep the total nitrogen the same through the season, but apply little and often and divide it over the cuts,” he explains.

For example, when applying a total of 250kgN/ha of bagged nitrogen over three cuts, split 100/80/70, on a five cut system this would work out at 50kgN/ha on five occasions.

In high rainfall areas, the same approach can be taken with slurry application. However, Dr Fisher says the shorter windows between cuts means there is less time for manures to be washed into soils, which can increase the risk of slurry getting into the clamp and reducing quality. This is an even greater risk on dry farms.

He adds: “If you’re in an area of low rainfall in June/July/August, you may decide to not apply slurry on aftermaths at this time and just use bagged fertiliser. If you don’t do that, you could defeat the object of a multi-cut system, which is to make quality silage.”