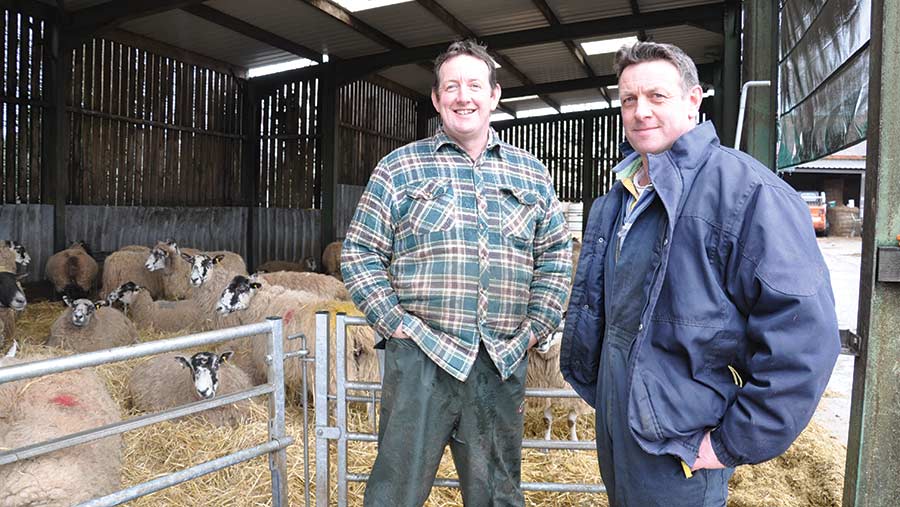 First-generation farmer Richard Fairbairn has reduced lameness in his sheep flock from 10% to 3% by vaccinating ewes and changing his buying practices.

Mr Fairbairn, who farms in partnership with his brother, Alan, near Bromsgrove in Worcestershire, says lameness cases spiked about six years ago. He believes the trouble stemmed from buying in replacement ewes.

“We found that even though we were spending good money on yearling ewes, we were still buying in feet trouble.”

Fed up with spending precious time firefighting cases of lameness, he enlisted his vet practice, MacArthur Barstow & Gibbs, to help diagnose the problem.

“It had really good results. We didn’t have too many repeat cases, so culling rates were minimal,” says Mr Fairbairn.

Any ewes that did go lame a second time were culled, but this was only about 3-4%.

Once they got on top of the problem, they vaccinated the whole breeding flock against foot-rot, and now vaccinate once a year only during high-risk periods.

This is normally before ewes move on to forage crops ahead of lambing, when stocking rates are high and disease risk is raised. Ewe lambs retained for breeding are vaccinated at weaning.

“That has given us the best results. Once we started using Footvax, scald dropped as well. I think it’s because it has reduced bacterial load.”

Four years ago, Mr Fairbairn also took the decision to start breeding his own replacements, so he could tighten up his flock health and lameness programme.

“I have been caught out in the past; I have bought in ewes and they brought Codd [contagious ovine digital dermatitis] on to the farm, which cost quite a bit to eradicate, so I thought that if I could breed our own replacements, it would be better all round.”

Previously, he bought in yearling ewes; now he runs a 100-head flock of North Country Mules to produce his own ewes for the terminal flock. He still has to buy in a small number of replacements for his maternal flock annually, but it has helped reduced his risk.

“I prefer to breed my own,” Mr Fairbairn says. “I always have to buy in North Country Mules, but I try to retain enough to keep up the Suffolk and Texel flocks.”

He is now more diligent when it comes to selecting replacements, too.

“I try to buy already-vaccinated sheep if I can. I would still vaccinate myself, but this gets you off on the right foot.”

He has also tightened up his quarantine procedures, so that if any lame ewes are unintentionally bought in, they don’t spread disease to the rest of the flock.

“In the past, I haven’t quarantined for long enough, but since I had the outbreak of Codd I have been more on the ball,” Mr Fairbairn says.

All bought-in yearlings are quarantined for a minimum of four weeks in a shed or field away from the other flocks.

During this time, they are put through a turnover crate and each foot is inspected for lameness and they are enrolled into the flock’s anti-abortion vaccination programme.

“If sheep have scald, we use an antibiotic spray, but if it’s anything more serious, they have injectable antibiotics. They are kept separate until they fully recover,” Mr Fairbairn says.

“We have to do the abortion vaccine first to ensure it’s done before they go to the ram, and we follow with the Footvax into the autumn.”

The brothers, who are not from a farming family, took on the tenancy at Hill Farm in 1996. They have since bought the farm and now rent a further 154ha of grassland within a five-mile radius of the holding.

Ewes and lambs are foot-bathed with disinfectant and formalin to help prevent lameness and treat scald – but with no hard concrete standing on the rented ground, it means it’s not always possible to allow feet to dry without becoming contaminated with mud.

To limit the spread of infectious foot diseases when gathering, they lime inside the handling pens and also lime high-traffics areas around water and feed troughs.

Mr Fairbairn says it’s not always practical to adhere to the FAI Five-Point Plan, but it’s about doing as much as is possible.

He says attending industry events such as Farmers Weekly’s Sheep Lameness roundtable helps focus the mind, too. “It really sharpens your pencil and ensures you carry on doing things you should be doing.” 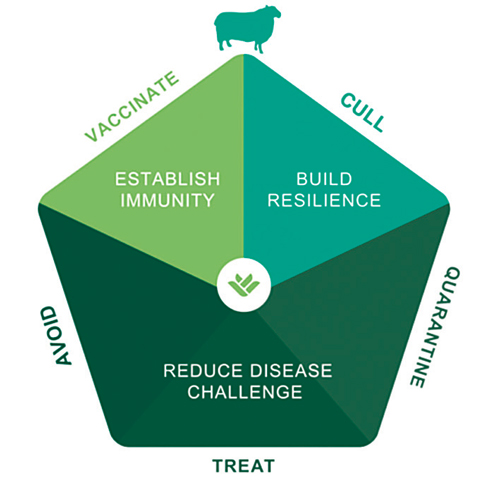 This summer, MSD Animal Health, together with Farmers Weekly, have been highlighting how the FAI Five-Point Plan (5PP) gives sheep farmers a clear framework for managing lameness effectively by bringing together recommendations from key stakeholders in the sheep farming community to provide best-practice guidance and a range of practical tips.

Adoption of the 5PP will maintain progress towards the industry target of achieving less than 2% lameness (as per FAWC 2011) in the national flock by 2021. Widespread adoption of the 5PP will also help reduce the amount of antibiotics used by the sheep industry by at least 10%, in line with the RUMA Targets Task Force 2017 recommendations.

For a healthy view of a sound flock, follow the Five-Point Plan: