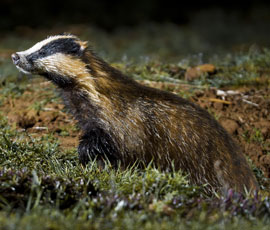 Activists are threatening to sabotage the pilot badger cull this autumn with direct action after a last ditch legal bid to stop the cull failed.

The anti-badger-culling lobby group “Stop the Cull” has posted a message on its website warning of direct action following the Badger Trust’s failed challenge at the Court of Appeal.

The activists are planning to take to fields and woods in the two pilot regions, west Somerset and west Gloucestershire, to disrupt any culling.

“As well as campaigning against the cull and raising awareness of it, we also aim to stop the culls using direct action,” says the message.

“We will be out in the fields before and during the cull, stopping and making citizen’s arrests on marksmen/women when we can, filming, rescuing injured badgers and neutralizing bait points when we find them.”

The group claims it knows the identity of farmers involved in the cull and has warned them that they will be watching their activities in the pilot regions over the next few weeks.

“Our intention is to watch farms that are involved in the cull, to make sure they are following correct biosecurity and animal welfare laws,” it adds.

“Basically, if you are a farmer involved in this cull, expect to be under a microscope.”

Anti-culling groups including leading welfare charities have united to continue efforts to stop the cull. The coalition includes the RSPCA, the Badger Trust, the League Against Cruel Sports, Save Me, and the Humane Society International UK.

The coalition held a rally under the banner Stop the Cull at Bristol on Tuesday (11 September), led by rock star Brian May. Further protests are expected in the West Country at the end of the month.

Mark Jones, executive director of HSI UK, said it had submitted a formal complaint to the Council of Europe stating that killing badgers contravenes the Bern Convention, which protects wildlife.

“The court may have ruled that a badger cull is legal but it remains ill-thought-out, unscientific and unethical,” said Mr Jones.

HSI UK’s complaint at the Council of Europe’s Bern Convention is now the badgers’ last hope against this bloody and pointless slaughter.”

However, DEFRA insisted that the cull will comply with the Bern Convention.

“We are confident that we are going to meet the requirements of the Bern Convention and we are already meeting them,” said a DEFRA spokesman.

“We will continue to work with the farming industry so badger control in two pilot areas can start as soon as is practical.

“No one wants to cull badgers but last year bovine TB led to the slaughter of over 26,000 cattle and to help eradicate the disease it needs to be tackled.”

The government has estimated that the cost of bovine TB to the taxpayer will be £1bn over the next 10 years until measures are taken to eradicate the disease.

DEFRA said it was working hard to assist Natural England, the government agency in charge of issuing the culling licences, to get them out “as soon as possible”.

Beef farmer Bill Harper, TB spokesman for the south-west region of the National Beef Association, urged farmers to back the cull.

He said: “We are very determined that we get the strong message across to all farmers that this is the only legal, organised and proper way of controlling the disease.

“Bovine TB is continuing to swirl around the hotspots areas and the infection levels are just as high as ever. There is no sign of it decreasing.

Mr Harper urged the police to take action against any activists who break the law.

“I’m very concerned about reports of people threatening to break the law,” he said.

“I’m calling on the police to prevent people from trespassing on private property with the intention to break the law.”