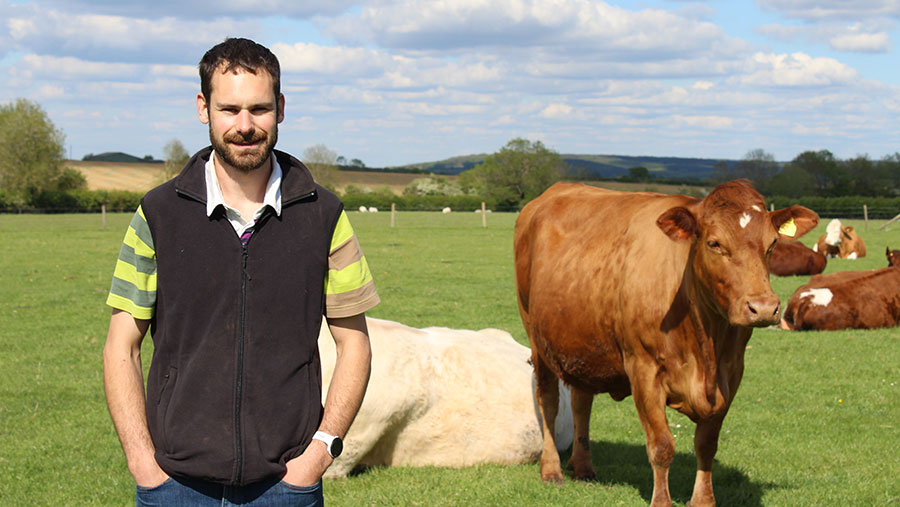 Buckinghamshire beef and arable farmer Richard Heady says his plans have been thrown into disarray after a cow tested positive for bovine TB at his farm.

Mr Heady, who runs WF Heady and Sons near Milton Keynes in partnership with his father and uncle, said the positive test “came like a bolt out of the blue”.

It’s the first time a cow has ever been found to have TB on the farm – and Mr Heady fears this could be the start of a “terrible journey”.

He told Farmers Weekly: “We have had the odd small bump on a cow before, but it’s never been enough to register it as a reactor.

“Anything minor we send off to slaughter and it has always come back as negative. You always know it’s a possibility [bovine TB], but when it does happen to you, you feel dumbfounded.”

The annual TB test was carried out on the herd of 120 beef cattle on 27 March. One nine-month-old Charolais cross Angus heifer tested positive for the disease.

“It was a home-bred beast that had not been mixing with any other cattle and was reared on the farm. The bull has been on the farm for two to three years, the cow for five years,” said Mr Heady.

The rest of the herd, including all the animals that were previously bought from Thame Market, tested clear.

Every spring after the herd goes clear, the cows are taken off to the quieter reaches of the 400ha mixed farm.

Mr Heady’s uncle also usually buys in more store calves from neighbours – which tend to be over 12 months old – to fatten on the farm’s fresh, home-grown grass.

It’s a relationship the Headys have built up over the years and it works well, allowing them to restock ahead of the summer.

But the positive TB test has scuppered these plans.

“We’re stuck with these cattle now,” said Mr Heady. “We’re low on cattle numbers and we have lots of grass and space. We are wondering how we can make the best of this situation.”

Mr Heady has no idea how the cow became infected. But he has recently seen badgers on his fields, which may have spread the disease to the animal.

“There are no badger setts on our farm, but I’m concerned that some of our badgers may be infected,” he said.

“As far as badger culling is concerned, I’m sat on the fence. It might be a necessary evil. But surely there is a better way to do it?”

Mr Heady is looking at different ways to raise income by letting out the fields to neighbours or making silage and selling it. He is also thinking about practical measures to “badger-proof” the farm.

The herd has been placed under movement restrictions until it has completed two consecutive clear tuberculin skin tests. Defra rules state that no movements of cattle onto a TB-restricted holding are permitted.

Buckinghamshire is part of the Edge Area that was established in 2013 as part of the government’s strategy to achieve officially bovine tuberculosis-free (OTF) status for England by 2038.