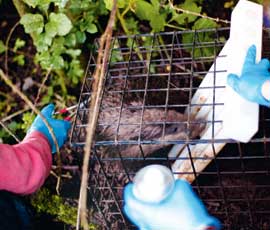 It is understood that some of the 13 farmers in the North Pembrokeshire Intensive Action Area are unhappy that the Welsh government dropped its plan to cull badgers.

The 13 farmers farm 5% of the land in the IAA. Wales’ chief veterinary officer Christianne Glossop is hoping they will change their minds. “We respect the right of these farmers to opt out but we are still hoping to convince them of the benefits of being part of the vaccination programme,” she said.

Dr Glossop confirmed the first year of the vaccination programme, part of government plans to curb bovine TB, was almost finished. The last of eight vaccination cycles would be completed before the end of the month.

She admitted the costs associated with the programme were high, but was confident a more sustainable delivery model could be developed from lessons learned during the first year. An area that could be explored is training farmers to deliver the vaccinations.

The Welsh government estimates the cost of the five-year vaccination project will be about £5,760,000. The vaccine alone costs £15 a dose.

New figures reveal bovine TB shows no sign of abating in Wales. According to NFU Cymru, nearly 5,000 cattle were slaughtered in the first six months of this year.

More than 75,000 cattle were slaughtered in Wales from 2002 to 2011 – the equivalent of more than the total number of adult dairy cattle in Carmarthenshire, the home of this month’s Welsh Dairy Show.

But he added that it was “not the appropriate intervention in an area of Wales where a significant proportion of badgers are already suffering from this disease”.

A Welsh Assembly government spokesman said: “Our decision to implement a vaccination programme to tackle the problem in wildlife was made after considering the findings of the science review, legal advice and other evidence provided.

“The science review indicated that repeated vaccination of badgers in an area is likely to build up immunity in the local badger population and it is logical to assume that over time this would reduce the risk of disease transmission to cattle.”