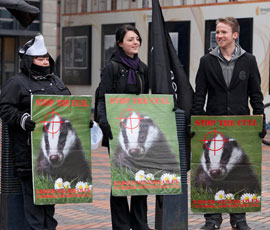 Animal rights campaigners have gathered outside the NFU annual conference to protest against the badger cull.

Around 100 protesters, including activists from the Hunt Saboteurs Association and the Stop the Cull campaign, staged a peaceful protest outside the ICC in Birmingham on Wednesday (27 February).

They held banners declaring “No Badger Cull No Hunting Act Repeal”, “Stop the senseless, mindless badger cull” and “They turn the fields red want everything dead no badger cull”.

As farmers shuffled past the activists and into the conference hall, some protesters broke ranks to accuse them of committing murder in the countryside.

Livestock farmers hit back blaming badgers for transmitting the disease to their cattle and ruining their businesses.

Oliver Edwards, who farms a closed herd of 160 Aberdeen Angus in Exmoor, has lost 20 cattle in the last year due to TB.

“Unfortunately, they (the protesters) cannot see the farming side of it,” he said.

“The only way we are going to do that is to deal with the wildlife reservoir like they have successfully done throughout other countries in the world.”

NFU Cymru vice president Stephen James, who once took part in a badger cull debate with Brian May, said 45 of his closed herd of cattle were culled in May owing to TB.

“If it was down to cattle to cattle they would have had TB in March having been in all winter, but because they have been out all summer, that’s a wildlife problem,” he said.

“Badger vaccination has cost £622 per badger, which is a nonsense. That is not sustainable for taxpayers. Research also shows the BCG vaccine only protects about half of vaccinated cows.

“I don’t care which side of the border culling starts, as long as it starts soon.”

In his speech to delegates, NFU president Peter Kendall congratulated Owen Paterson for having the courage to commit to the badger cull policy.

Mr Kendall said bovine TB was responsible for the slaughter of almost 35,000 cattle over the last 12 months – 4,000 more than in 2011. “What a scandalous waste for our industry,” he added.

Despite widespread public opposition, the government insists that the cull is crucial to tackling bovine TB and will go ahead this summer as planned.

DEFRA secretary Owen Paterson reaffirmed his commitment to the cull when he addresses delegates in his conference speech later today (Wednesday).

The government insists that the pilot culls will begin in west Somerset and west Gloucestershire “as soon as possible”.

The cull was originally scheduled last autumn but postponed at the last minute after badger numbers were found to be much higher than anticipated. Final culling licences have now been issued by Natural England for both pilot areas.

The pilots could begin as early as 1 June this year after a closed season for culling, designed to prevent distress to badgers on their dependent offspring has been observed.

A reserve trial cull area has been earmarked for Dorset in case plans for pilots are withdrawn in either west Somerset or west Gloucestershire.

The policy, which will see badgers shot by trained marksmen, will test whether the animals can be killed in a safe, humane and effective manner. It will allow the free shooting of badgers, cage trapping and shooting and will last six weeks.

An independent panel of experts will monitor and evaluate the pilots. If ministers decide to proceed following the pilots, a maximum of 10 licences will be granted to start each year.

A workable vaccine for cattle to prevent the spread of the disease will not be available for at least another 10 years, say EU officials. But the government says we must bear down on the disease in wildlife first.