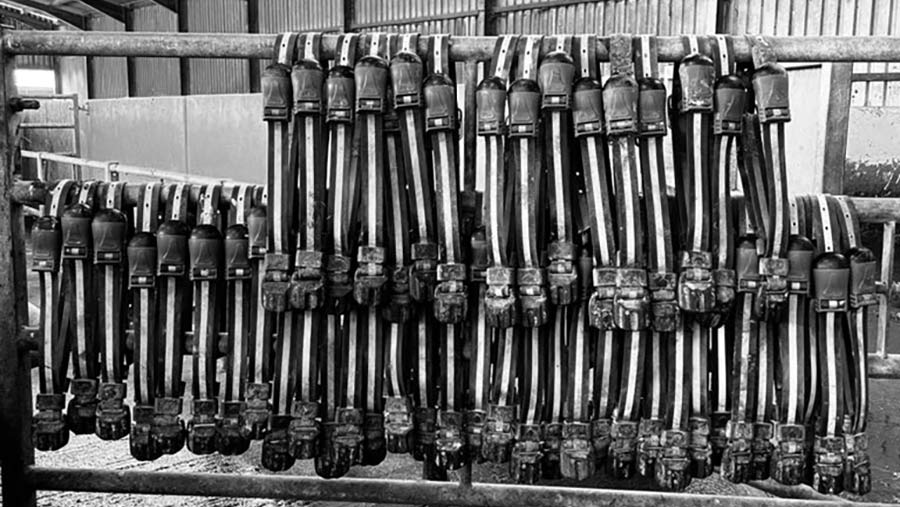 A Pembrokeshire dairy farmer who lost 51 cows to bovine TB has spoken of her frustration over a lack of action from Welsh government to tackle the disease in wildlife.

Hannah Lawrence has posted heartbreaking photos and videos on her Twitter (@HannLawrence) and Instagram (preseli_view_pedigrees) accounts of the condemned cows being taken away for slaughter.

One poignant black and white photo also shows the cows’ collars hung up in the parlour after the animals were removed from the farm.

Today’s the day. Collars are hung up. We are saying goodbye to 51 innocent cows. #teamdairy pic.twitter.com/9KLXaH6uZF

Ms Lawrence, who farms with her partner, Harri Vaughan, at the three-generation dairy farm near Haverfordwest, said years of breeding and pedigrees had been “chucked away” after the failed blood tests.

Forty-six cows, including heifers, were taken away for slaughter by lorry and box, but six had to be shot on farm because they were close to calving or had just calved.

“We have been in and out of TB for a few years and we have lost a few cows here and there,” said Ms Lawrence. “We felt backed into a corner and the ministry required us to carry out a blood test on all 300 cows.

“We felt sick waiting and when the day came and they phoned with the results, everyone was speechless. It’s a massive hit.

“You work tirelessly for your cows. You give them everything and then 51 are taken away like that because of things out of your control.”

Ms Lawrence could barely look at the cows in the week before they were removed and said the experience was “horrible” and “heartbreaking” for the whole family, especially the grandparents who had built up the herd over many years.

She said trimming the cows to be valued before being slaughtered “made no sense” as they meant a lot more to them than money.

Ms Lawrence accused the Welsh government of not wanting to face reality or the science in its bovine TB policy.

Trimming the girls up to be valued to just be slaughtered.. does this make any sense? 🐄 .. yet the @WelshGovernment doesn’t want to face the reality or science of it all. #teamdairy pic.twitter.com/Xrn9PYn9tq

“They don’t listen to farmers one bit. The policy needs a lot of work,” she said.

“The Labour administration made a promise not to cull any wildlife and they can’t go back on their pledge. Unfortunately, it looks like it will be staying like this, for now anyway.”

NFU Cymru said feedback from its members who were recently surveyed about the Welsh government’s Refreshed TB Eradication Programme revealed a great level of anger and frustration within the industry at the repeated failure of successive governments to implement a comprehensive TB eradication strategy in Wales.

The union’s new deputy president, Abi Reader, said: “Welsh government’s 2021 Programme for Government has categorically ruled out the culling of badgers to control the spread of TB in cattle which suggests that, regardless of science and evidence, this government has made a political decision to take away part of an eradication programme that has been used by every country that has implemented a successful TB eradication programme.

“Many of the Welsh farmers who are suffering emotionally and financially as bovine TB rips through their herds are feeling an increased apathy when it comes to Welsh government’s refusal to implement measures to effectively tackle the disease across all its vectors.”

She added: “NFU Cymru will continue to work tirelessly for a comprehensive TB eradication strategy for Wales, a strategy to give hope that we can rid this disease from our countryside once and for all.”

A Welsh government spokesman said: “TB in cattle is a huge challenge for all concerned, and distressing for farmers who have to deal with it in their herds. Part of the solution to the problem is the willingness of people, both in government and the industry, to work together.

“We have outlined in our Programme for Government we will not permit the culling of badgers as part of measures to deal with bovine TB. Recent scientific studies did not provide conclusive evidence that culling badgers alone would reduce incidence levels in cattle herds.

“However, we have made an additional £100,000 available for expanding badger vaccination across Wales. It has been proven that more infection is transmitted within species than between species, which suggests that controlling transmission among cattle is a priority in the strategy for eliminating TB.

“We have seen good progress towards eradication since we established our programme in 2008, with long-term decreases in new incidents and prevalence.

“Farmers are at the centre of what we’re trying to achieve, and we are, of course, listening to them. We have been clear we can’t tackle this disease alone and we all have a role to play. The consultation on our refreshed TB eradication programme has recently closed and we will carefully consider all the views provided.”