Always a big believer in plunge-dipping, Mr North-Lewis’ flock, based at Colwell, Hexham, has been dipped by Neil Fell Sheep Dipping (NFSD) – 2019 Farmers Weekly Innovator of the Year – for about 14 years.

“I used to dip them myself and rent a mobile dipping trailer for three or four days,” explains Mr North-Lewis. “I was worried about lice at the time.”

Now all breeding sheep are dipped annually in an automatic mobile dipping truck, and last year, all lambs were dipped too – 6,500-head in total. 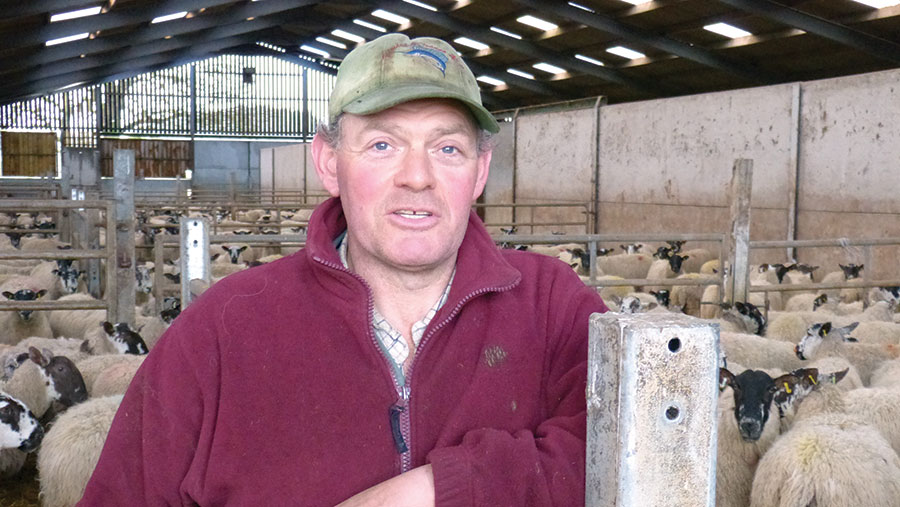 The dipping crate is operated by three contract dippers all wearing personal protective equipment (PPE). Sheep move through pens, up a race and through the dipping trailer.

Dipping typically takes place two weeks before tupping kicks off, when ewes are given their pre-tupping check at the start of October.

Throughout this time, Mr North-Lewis doesn’t go near the dip. He collects mobs of sheep on a quad bike and takes them away once the sheep have dried.

This means all necessary precautions are taken, explains Mr North-Lewis.

NFSD then disposes of the used sheep dip safely, storing it in plastic tanks before the council remove it. 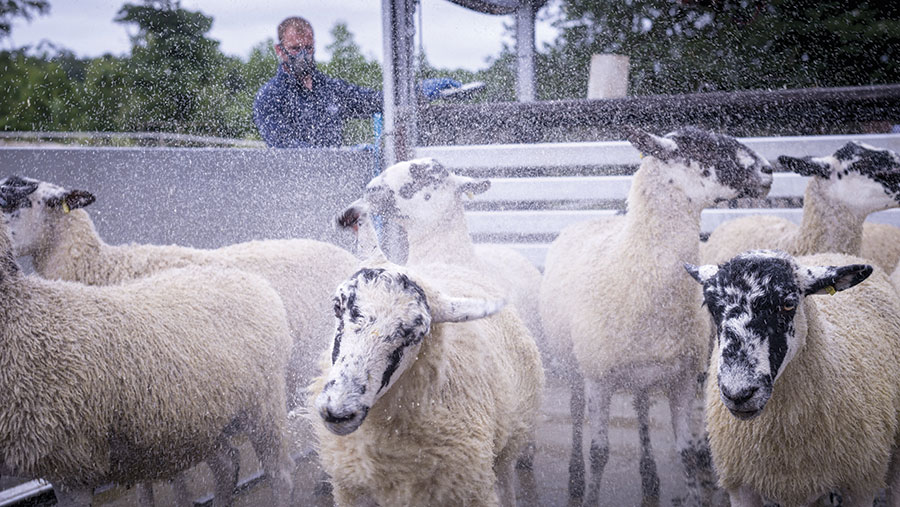 The crate dips in excess of 300 sheep/hour, which is more than double the rate of a standard mobile dipping trailer.

This means breeding sheep can all be processed by Mr North-Lewis and the contractors in a single day, despite the farm only employing a part-time labourer.

A farmhand comes to work two to three days a week, and extra lambing workers are needed in the shed in March and April.

The distance sheep are moved is minimised because the dipping trailer travels between the two main farms of the business, starting at the home farm – South Farm – and then Park End five miles away.

A vitally important feature of flock health and productivity for Mr North-Lewis is biosecurity, which he explains can be difficult to achieve as a tenant farmer with lots of neighbours.

While Mr North-Lewis has no reason to worry about sheep farms in the area, he sees dipping as another tool to manage all ectoparasites. 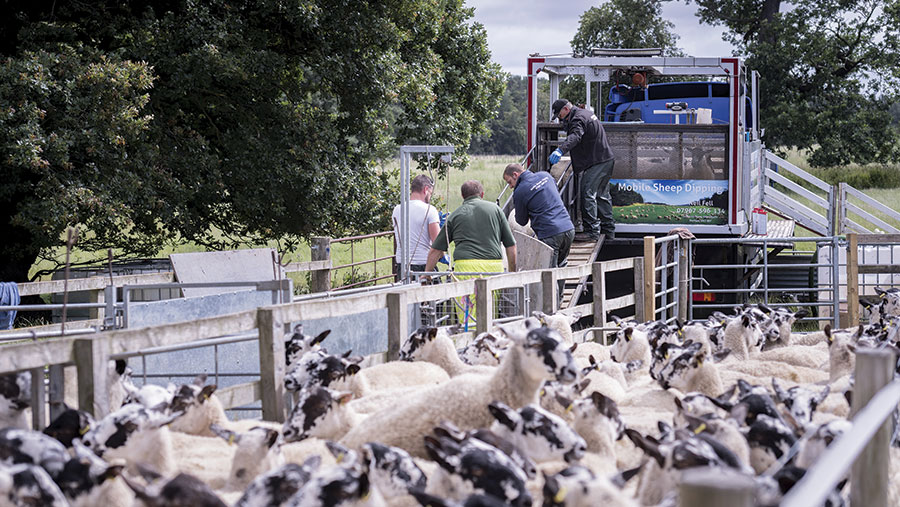 With the entire farming business on rented land, the flock has 11 different neighbours (all with sheep) and four landlords.

This includes 242ha of upland summering ground grazed by dry hoggets as part of a moorland conservation scheme 25 miles away near Alston.

Hoggets are shorn in May before leaving the farm for the summer and are dipped when they return in early autumn.

In addition to dipping, fencing is also a key investment, which has been improved in recent years at a cost of about £6,000/year to minimise cross-border contact.

North of England Mules have been bought privately from a trusted and reputed breeder. However, the farm is now looking to breed replacement from Innovis sires (Aberfield and Highlander).

The flock has been financially analysed and benchmarked for many years by Elliot Taylor, who previously worked at the Newcastle University and is now a partner in George F White, a firm of land, property and business consultants.

Mr Taylor’s mantra is to consider the cumulative effect of marginal gains to improve business efficiency and balance cost control and flock output.

A key part of returning a healthy gross margin every year is good productivity out of prolific cross-bred ewes, explains Mr North Lewis.

The farm typically sells 1.6 lambs per ewe tupped, with a top figure of 1.68.

Scanning of at least 180% is needed to get the volume of lambs, and part of this is a good flush in late summer after dipping, explains Mr North-Lewis

“I’ve always liked the fact sheep bounced after being dipped,” he explains. “The ewes seem to flush better and look like better sheep. It helps the lambs finish too.

The cost of the dipping also stacks up against other options, explains Mr North-Lewis.

Costing a cypermethrin pour-on at 15p a dose for lambs and 30p for ewes, Mr North-Lewis says that at two doses a year, this treatment could cost about £1,080 across 1,800 ewes alone and this only covers flies and ticks. 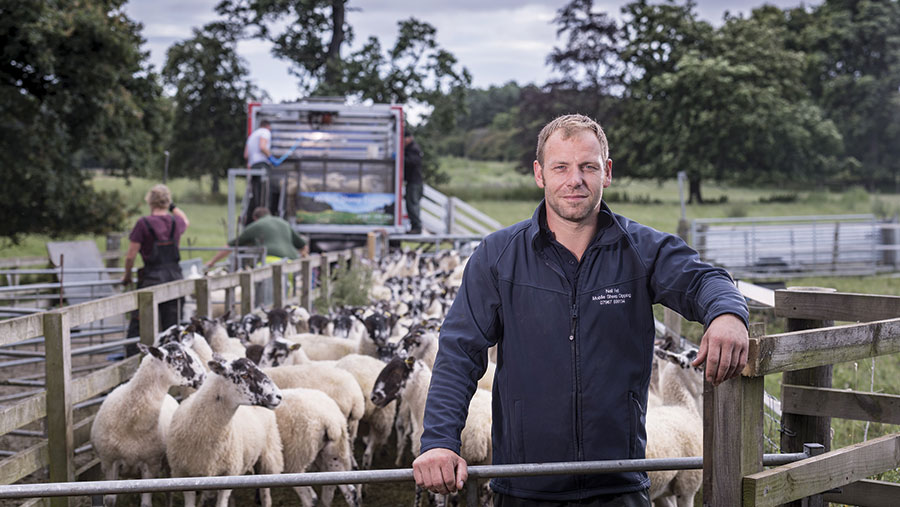 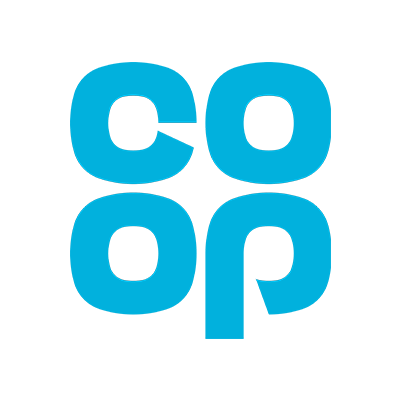 The Farmers Weekly 2020 Farm Innovator of the Year Award is sponsored by Co-op.