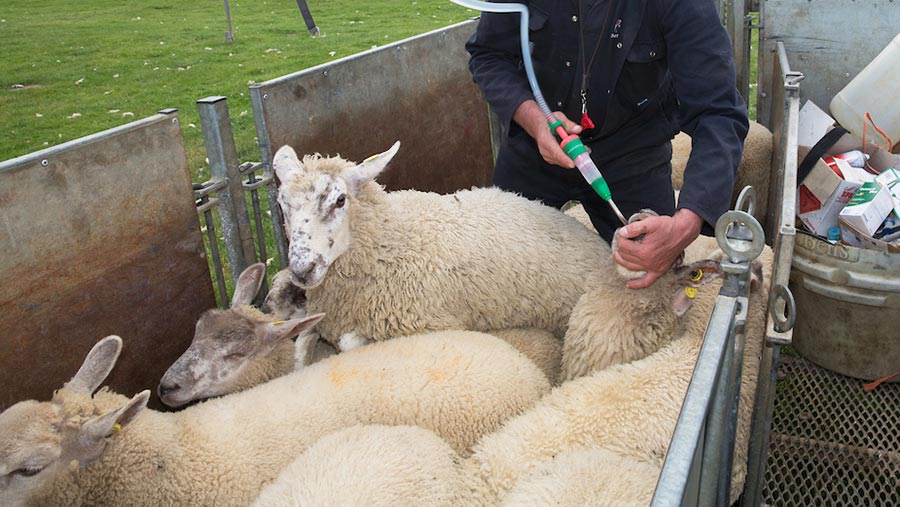 Handling sheep may not come with the safety risk seen with cattle but ensuring systems are set up correctly goes a long way to reducing labour inputs and sheep stress.

Find out more about why good handling matters and how to improve handling techniques and systems.

Handling sheep to carry out tasks such as shearing can be stressful to the animal and cause reproductive issues, reduce immunity to disease and affect output.

Bruising due to man-handling in raceways or sheep making contact with badly designed or maintained systems can cause carcass damage, with economic consequences.

Handling takes up a considerable amount of time before any actual procedure is carried out. Good handling systems speed up flock movement and reduce overall handling time.

Poor handling techniques and facilities increase the risk of injury to your workers or yourself, leading to costly absences.

There are several areas of sheep behaviour that should be considered when designing or modifying a handling system.

According to livestock handling expert Miriam Parker of LivestockWise, stockmen can make significant steps to improve their systems by understanding and make use of normal sheep behaviour.

“It is better to make use of a sheep’s willingness to learn to negotiate a system rather than use fear as the motivator,” she says.

As soon as lambs are weaned, you have a group of naïve animals which don’t know where to go. By introducing a couple of cull ewes into the group, you can encourage flocking behaviour.

In a large group of lambs, a minimum of three nannies may be required, since three animals are needed to start a flock.

Some markets have installed mirrors in their stock ring to encourage sheep into the ring. This could be used at farm level, but again, it will be system specific.

When doing so, ensure mirrors are positioned in the correct place to reflect moving sheep – the sight of stationary sheep will slow them down.

1. Look at sheep behaviour as they are being run through a system

2. Get down on your hands and knees at sheep level to see what they are seeing

3. Measure your sheep – there is no ‘average’ figure for sheep

Ninety degree angles and poor funnelling had made handling sheep at Overbury farms a labour-intensive job.

However, after an on-farm workshop explained how stock viewed their surroundings, the farm was able to make significant improvements to the system layout.

Our original system was installed in the mid-1960s – not only was it ready for modernisation, but we were also experiencing problems with sheep flow, explains farm manager Jake Freestone.

A lot of the pens were angular, resulting in animals stopping and not funnelling in the required direction. As a result, there was a lot of unnecessary movement of both sheep and shepherds.

By viewing the handling system from sheep level and wearing a pair of goggles to simulate how a sheep views its surrounding, farm workers at Overbury were surprised at how restricted a sheep’s vision was.

“This explained why sheep flow was not ideal – stock couldn’t see where they were going,” says Mr Freestone.

The 90º entrance into the circular force pen has since been modified into a curved race with sheeted hurdles. An additional race has also been added for handling lambs.

“We used to handle ewes and lambs in the same race, but experienced issues with lambs turning round.” The narrower second race allows closer control and includes an electronic weigh crate.

By addressing group size and handling smaller and denser groups of ewes, control has also been improved.

“Generally, sheep move better under their own steam. Although we still use dogs a bit, we do not rely on them as much,” Mr Freestone explains.

“Speed and efficiency with stockmen has also been significantly improved because they do not need to walk up and down the pens to push sheep forward.”

According to Mr Freestone, considering what the system is used for is also important when designing layouts.

“In the larger race we now have a footbath and have designed it so a race full of stock can stand in the footbath while we treat the group behind them. The smaller race also makes it a lot easier when selecting fat lambs.”

“We include one or two nanny ewes for each group of 400 lambs – it’s incredibly easy to do and helps when moving lambs from the field to housing or through the handling system.”