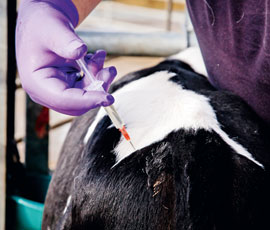 Welcome to Farmers Weekly’s Making Sense of Medicines campaign, supported by the Responsible Use of Medicines in Agriculture Alliance (RUMA) and the National Office of Animal Health (NOAH).


Concern over antibiotics resistance in livestock and humans is driving change in how they can be used on farm. To safeguard a healthy livestock industry, farmers must demonstrate they are using medicines responsibly or face losing key disease control measures for good.


British farmers are leading the way when it comes to high animal welfare and work tirelessly to maintain the health of their animals. However, global pressure over medicine use in animals and humans means the industry is under the spotlight and we must be seen to be doing all we can to use medicines responsibly.


Doing so will not only secure our position as world leaders, but also save costs on farm. Using medicines only when necessary and as instructed will protect their efficacy long term and save on the expense of unnecessary treatments.


Consequently, Farmers Weekly is launching this six-week campaign to help equip livestock producers with the latest thinking on medicine use to ensure the industry continues to have access to the medicines that are fundamental to running productive, high health and welfare systems.


The campaign will address responsible use of antibiotics, wormers and vaccines through farmer experience and expert opinion and will be supported by a range of online resources.


Claims by organisations such as the Alliance to Save our Antibiotics and the Soil Association have ensured the livestock industry has taken some serious hits in the blame game surrounding antibiotics resistance (AMR) in humans.


This, coupled with the highly emotive language used by government officials and the wider media – comparing resistance to a “ticking time bomb” and global warming – has also ensured the issue is at the forefront of the public’s minds.


As a result, the way in which UK farmers access and use their medicines looks likely to undergo a complete shake-up in the very near future.


The UK government looks set to cement its commitment to tackling antibiotics resistance later in the year through the release of a new cross-government Five Year Antimicrobial Resistance Strategy and Action Plan for 2013-18.


The document is believed to recognise both the human and animal health sectors have a role to play in tackling the problem, through a “one health” approach.


Suzanne Eckford from the Veterinary Medicines Directorate (VMD) says that, although use of antibiotics in humans is now understood as the main reason for AMR in humans, there is the potential for resistance to be passed through the food chain.


“The risk to humans from resistance developing in animals must be kept to a minimum. We are therefore continuing with our efforts to promote the responsible use of antibiotics and develop actions by working closely with all those, including farmers, with an interest in AMR.”


The UK Antimicrobial Resistance Strategy is expected to reaffirm existing strategies outlined by the government, including an emphasis on prevention and control of disease. Aims are also likely to include improving education, awareness and research surrounding AMR and encouraging the development of new medicines.


The UK’s approach to AMR has been partly influenced by recommendations outlined by the EU Commission, which is strongly committed to tackling the problem. A range of EU legislation is under review, including the Veterinary Medicinal Products Directive. This could include a number of changes to how antibiotics are used and accessed.


What could this mean for UK farmers? There is no definitive answer as to what changes may look like, and any suggestions will have to be debated by all 27 EU member states before policy is implemented. However, potential changes as part of various legislation could include:

Is farming to blame for antibiotics resistance in humans?

What changes to medicine use have already happened?


Much of the current debate around antibiotics uses the term “antimicrobial”. 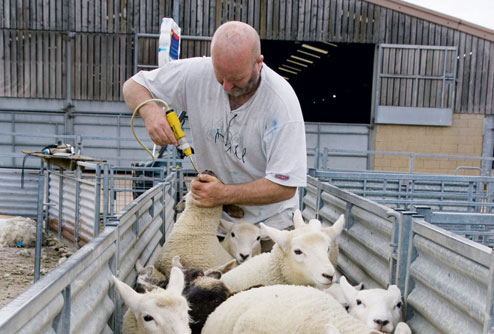 Concerns around medicine use do not just lie at the door of antibiotics.

The Federation of Veterinarians of Europe (FVE) and the British Veterinary Association (BVA) are also calling on the EU Commission to tighten up the accessibility of wormers, to reduce the development of wormer resistance.


Peter Harlech Jones, president of the BVA, claims the current ease of accessibility to wormers in the UK has compounded the growing level of wormer resistance seen in livestock.


“We’re absolutely sure the availability of these products to farmers, without proper clinical diagnosis, has meant they have been used inappropriately and led to resistance. There is so much resistance in grazing animals, and particularly in sheep. We need to change.”

The extent of the problem in sheep is believed to be significant. Sustainable control of parasites in sheep data identified 100% of English lowland sheep flocks and 83% of upland flocks as resistant to white drenches (benzimidazole).

Seventy-five percent of eight sheep farms surveyed also had triple resistance to white, yellow and clear wormers. The problem is also believed to be growing in cattle. Mr Harlech Jones thinks the situation is more serious in liver fluke because of growing resistance to triclabendazole – the only effective treatment against immature fluke.


Twenty-eight percent of sheep farms sampled as part of an AHVLA study were suspected of having resistance to triclabendazole. However, the true extent of resistance is unknown. Mr Harlech Jones says resistance, coupled with the worst fluke challenge on record this year, means there’s a “crisis already happening”.


In most EU countries, wormers are POM-V meaning they can only be prescribed by a vet after a clinical diagnosis. However in the UK, they are POM-VPS which means they can be prescribed by any RQP (registered qualified person, such as a vet or pharmacist) or an SQP (suitably qualified person). A clinical assessment of the animal(s) is not required. Some organisations are calling for wormers to become POM-V in the UK.


However, calls for wormer rules to be brought into line with the rest of the EU have been challenged by the Animal Medicines Training Regulatory Authority (AMTRA). Secretary general Stephen Dawson says the current system of suitably qualified people (SQPs) being able to prescribe wormers works well in the UK.


He argues a “pseudo-monopoly” by vets on supply would do nothing to help farmers in difficult times and that countries with vet-only channels of prescription still have resistance problems.

Look at prevention and how to reduce the likelihood of disease – When you’re using antibiotics, it means your preventative measures have failed. Look at disease control as a holistic approach to reduce the need for antibiotics, full stop.