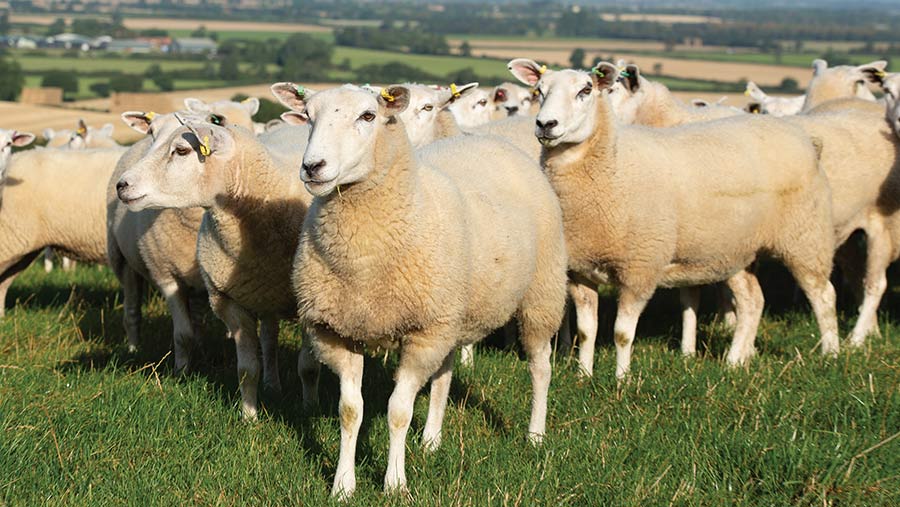 Upping ram power and moving lambs back on to grass at scanning are some of the adjustments a Lincolnshire farm hopes will make breeding ewe lambs successful.

This autumn will be the fourth time Chris and Louise Elkington of Gelston Lamb, Grantham, have bred ewe lambs. 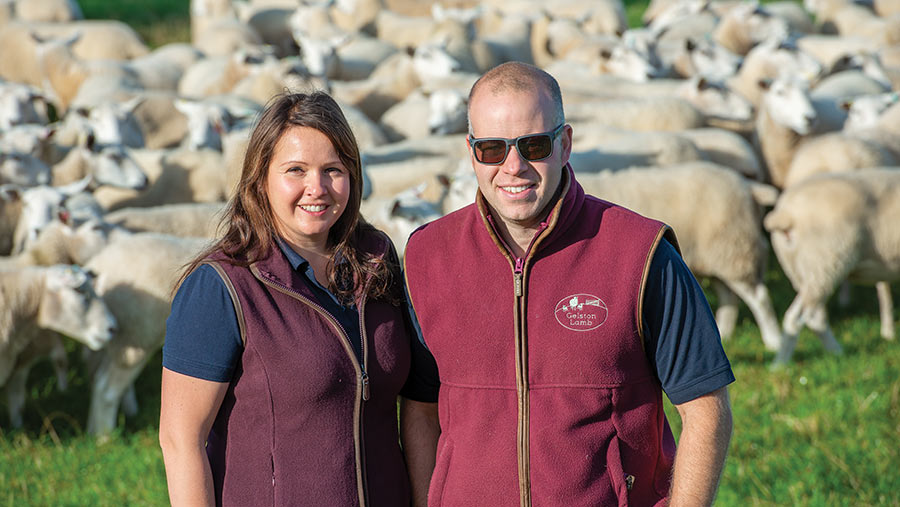 Previous years have seen either low scanning percentages or difficult lambings because lambs were on too high a plane of nutrition, explains Mr Elkington.

But the Elkingtons have persevered in the belief that that running 150 empty sheep all winter seems wasteful.

“If we can get 90-100% lambs reared that will be fine,” says Mr Elkington, who runs an AHDB Strategic Farm. “It’s not any more investment really and they make much better shearlings and mature ewes.”

During a recent AHDB webinar the Elkingtons listed five key changes they would make over the next year to improve the growth and rearing percentages of their ewe lambs.

Outdoor lambing flock: About 380 outdoor lambing ewes make up the farm’s “A” flock. Ewes are criss-crossed to maternal performance-recorded Aberfield and Highlander rams and lamb from 1 April. Ewe lambs lamb from 10 April to easy-lambing terminal sires.

Indoor lambing flock: About 175 ewes in the farm’s “B” flock lamb in February/March indoors. Sheep are drafted into the “B” flock if they needed assistance at lambing or had poorer lamb performance.

They are bred to Charollais terminal sires. Fifty ewes will get a Lleyn ram and lamb indoors next year to give female progeny more time to reach tupping weight.

Markets: Most lambs are sold directly through the farm’s butchery (built on-farm last September) and burger business Gelston Lamb. Lambs are drawn at 42-45kg at an R4 or R3H carcass.

About 170 lambs have been sold to Randall Parker this year at an R3L carcass. Cull ewes are either grass finished and sold as mutton or sold at Melton Mowbray market.

Forage: Herbal leys and a red clover ley have been drilled over the last year to improve forage quality and minimise dependence on bought-in feed.

Creep feeding does have a place on the farm as it gives the Elkingtons some control as to when animals can be finished for the butchery, which requires lambs all year round.

About 90% of lambs are on course to make this, but the Elkingtons are a little frustrated after ewe lamb growth was very strong earlier in the summer.

Eight-week and 12-week weights were 2kg above the AHDB target of 20kg and 30kg respectively. But post-weaning weights kept dropping when lambs went on to red clover (see graph).

Faecal Egg Counts (FECs) with a FECPAK were done at least fortnightly. Lambs were given an orange drench, an iodine drench and a mineral bolus to help address below-target growth rates.

But despite all efforts to help the lambs, nothing seemed to work until the lambs went into a grass field on grass and white clover field with access to grass and barley pellets.

Dr Liz Genever, independent beef and sheep consultant and the farm’s Strategic Farm adviser, struggled to explain why growth was so disappointing.

“My expectation was they should easily do 125g/day on a red clover rotation,” says Dr Genever. “Some did this, but the average was 115g a head/day.”

A detailed soil health analysis is taking place in that field to check if there are any soil health issues. This will analyse the chemical and physical characteristics of the soil.

“There is the wider question about the Elkingtons system, which is the genetic potential of the stock. If they want to reduce concentrate use, they will have to select from animals that who performed of a more grass-based system.”