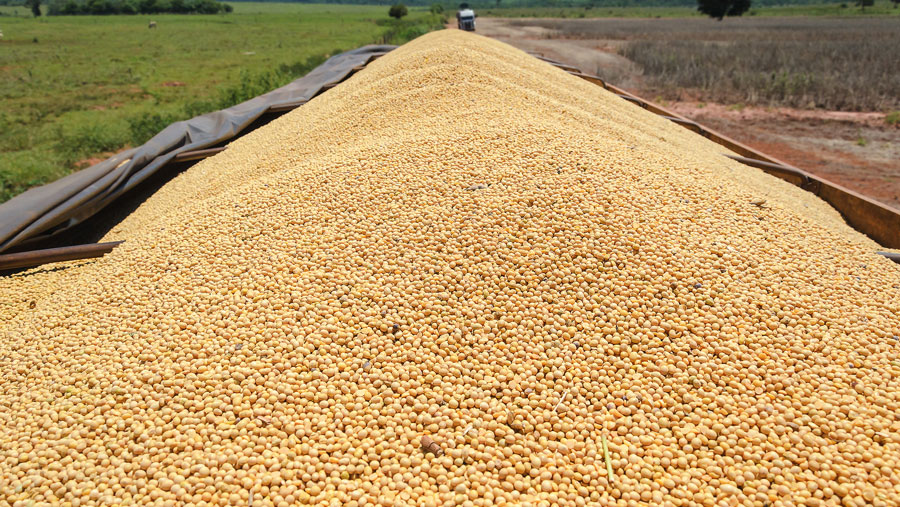 The use of imported soya in livestock and poultry feeds looks set to be limited in future, following a deal secured at the climate summit in Glasgow to end and reverse deforestation by 2030.

According to the UK government, 80% of tropical deforestation is driven by global trade in agricultural commodities.

In the first major deal announced at the COP26 summit, Defra secretary George Eustice secured an agreement from more than 100 countries to protect the world’s forests.

Mr Eustice said large-scale production of commodities through agroindustry was the largest contributor to deforestation, and this includes animal feed grown on deforested land.

But not all soya is grown on deforested land – more than half the volume imported into the UK is either certified as responsibly sourced or comes from Canada or the US with no deforestation risk, according to the Agricultural Industries Confederation (AIC).

There is likely to be a greater due diligence requirement on manufacturing companies which make use of forest-risk products such as soya and palm oil to ensure they are not linked to illegal deforestation.

This is being proposed in the government’s environment bill.

The poultry industry is the biggest user of soya in the UK.

Using soya certified as deforestation-free has been a barrier in an industry which operates on very tight margins.

But British Poultry Council chief executive Richard Griffiths said that although soya is used as part of poultry feed, the organisation “heavily supports” responsible soya production along with investing in alternative feedstuffs.

“We are always looking for ways to reduce our impact while improving productivity since we all have the responsibility to produce safe, nutritious and affordable food for everyone,” he said.

The Soil Association said more than 2.2m tonnes of soya are imported into the UK each year, mostly for animal feed, the majority for chickens.

It said the announcement was “excellent news” and it urged farmers and consumers “to shift towards better quality, grass-fed meat”.

In the dairy sector, between 200,000 and 300,000 tonnes of soyabean meal is imported into the UK each year to incorporate in dairy rations.

There is pressure from UK milk processors to reduce reliance on imported soyabean meal as a rumen-bypass protein in dairy cow diets.

In its response to the deforestation agreement, Red Tractor, the UK’s largest farm assurance scheme, covering 46,000 British farms, said that as an associate member of the UK Roundtable on Sustainable Soya, it was “committed to engaging with all stakeholders and industry to move to a more sustainable position for our brand, while recognising the complexities involved for our members”.

Retailers and food service outlets have been initiating policies to move their supply chains over to more sustainable sources of soya, or eliminating its use altogether.