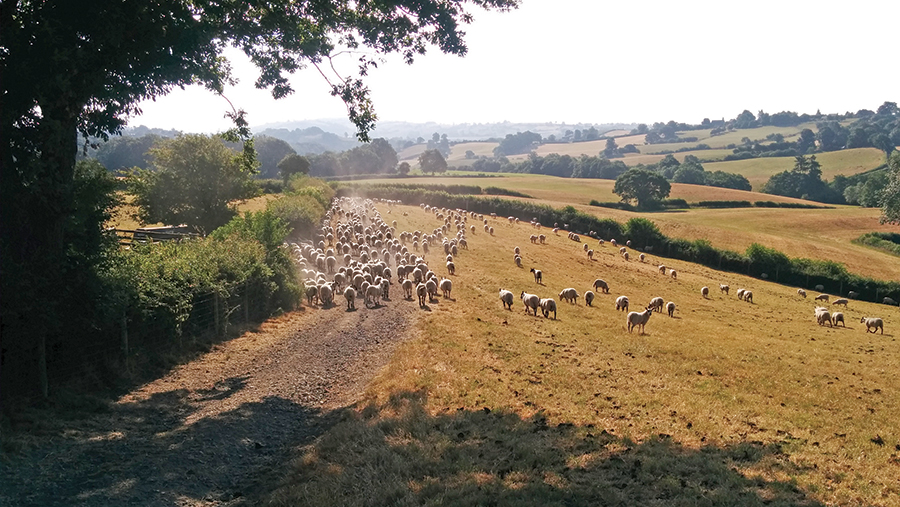 Scorched fields on John Yeomans’ farm near the Welsh border

After a difficult winter and recent prolonged dry spell, farmers are on the verge of a serious fodder crisis because of stunted grass growth.

Following two months of scorching weather, grass growth has almost ground to a halt and many livestock farmers across the country are already being forced to eat into autumn feed supplies.

The NFU estimates that grass silage stocks are down by 66% so far this season and many farmers are buying in alternative feed, which is driving up costs and affecting profits.

Dairy farmers are dipping into fresh fodder supplies that they would normally keep for the winter months to ensure their cows continue to produce milk as pastures have dried to a dust bowl.

“We are facing a problem with fodder for the housing period when the cows come in from October onwards,” said NFU chief dairy adviser Sian Davies.

“Unless we have a good late summer with lots of rain and get grass-growing weather, what would normally be there to feed cows in the autumn just won’t be there.”

Abi Reader, who milks 190 cows near Cardiff, said: “We came out of last winter with no surplus. We are feeding our supplies for next winter now, so there won’t be anything left. It’s a big concern.”

With maize and grass silage in short supply, farmers have been trying to secure wholecrop. According to forage specialist Germinal UK, this has pushed up prices for standing maize for forage to £243/ha.

Beef and sheep farmers have also been feeling the pain of the drought, with anecdotal reports of poorer fertility in beef herds and producers finding it harder to finish lambs.

Despite the additional costs, more arable farmers are baling and selling straw this harvest rather than incorporating it, to help meet increasing demand for forage from livestock farmers.

The shortage of straw has seen the NFU relaunch its Fodder Bank to help its members find feed and livestock bedding, and allow them to sell any surplus to those in need.

The NFU is also urging milk buyers not to penalise dairy farmers on fixed-volume contracts who are unable to meet volumes due to challenging conditions, or those with reduced  milk solids due to cows drinking excessive amounts of water.

Although some areas are expected to see a little rain over the coming days, the Met Office is forecasting the hot, dry spell to continue into August.

Most groundwater supplies remain at healthy levels in England and water companies have enough water to maintain supplies if resources are managed properly, says the Environment Agency (EA).

However, enforcement officers will be carrying out inspections on farms to assess compliance with abstraction licence conditions, particularly as dry weather continues.

Paul Hickey, EA head of water resources, said: “We have robust plans in place to respond to these pressures and have stepped up our incident response as well as regulation of those abstracting water to ensure the environment is protected.”

Sheep and beef farmer John Yeomans is going to great lengths to keep his animals fed and watered in the prolonged dry spell.

Mr Yeomans said the scorched fields at farm in Adfa, near the Welsh border town of Newtown, were reminiscent of the dry conditions in 1976 and, like many farmers, he is hoping for proper rainfall to get a second cut of silage.

He has been rotating his 700-strong flock of Beulah Speckled-face ewes and Welsh Mules “from one bare field to another”. Keeping his Limousin and cross Limousin cattle happy has also been a challenge.

Two months of dry weather have taken their toll on groundwater supplies on the 115ha upland farm. All but two of the concrete rings have dried up.

For the past fortnight, the Yeomans have been carrying water from their mains supply at home to sheep on the hills. The livestock have also been drinking water from two brooks.

“We appreciate that other farmers are in a worse situation than us,” said Mr Yeomans. “But we’re concerned about the price and availability of fodder and hope that nobody is taking advantage of the situation.”