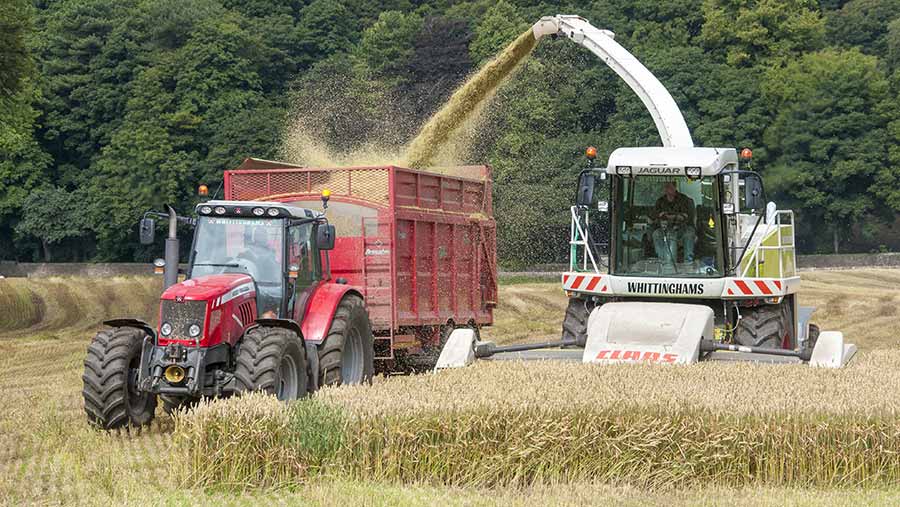 Diets made up mainly of wholecrop wheat can offer a suitable alternative to bought-in cereals for finishing cattle, a recent study has found.

Cattle also had a better margin per kilogram carcass gain. Feed is the main variable cost of finishing beef cattle and typically represents 75% of costs.

Simon Marsh, principal lecturer and beef cattle specialist at Harper Adams University, says that with the recent volatility in cereal prices and relatively high price of cereals compared with forages, it is important to evaluate the effect of replacing cereals with a high-energy forage when finishing beef cattle.

He says: “Farmers need to look at ways of reducing costs while maximising production efficiency. With feed the major cost on beef finishing units, we felt it was necessary to explore alternative options.

“Wholecrop wheat was used instead of maize silage due to the inability to grow it in many parts of the UK.”

The diets were formulated to supply similar quantities of protein. Before the start of the trial all the cattle were fed the WCW50 diet. The rations were fed via troughs and gradually introduced over a 10-14-day period. Straw was offered ad-lib in racks.

Cattle were fed the diet from the middle of November, after they had become accustomed to housing and the winter diet. They were treated with anthelmintics, vaccinated against pneumonia and clostridial diseases, and their backs were clipped out.

Mr Marsh says: “As the results show, farmers should either finish cattle on ad-lib cereals or consider replacing a significant proportion of cereals – for example, 75% – with a high-energy forage.

“Feeding a 75% WCW diet has the ability to reduce price volatility and reduce feed costs. It is my recommendation, if farm resources are available to make, store and handle forage, the replacement of 75% of cereals with well-made, good-quality, high-energy [25+% starch, 10.5+ME] wholecrop should be considered.”

The trial showed cattle ate more forage to compensate for the lower energy value of the forage-based rations.

“An analogy I would use for the lower DM intake with the ad-lib cereal is that it’s like trying to eat three cream crackers in a minute without a glass of water. The WCW stimulated feed intakes.”

Wholecrop should be fed as a TMR and a shear grab block cutter should be used on the clamp. “Ideally, you should have a small clamp face and go through the clamp at least 1m a week to minimise any spoiling.”