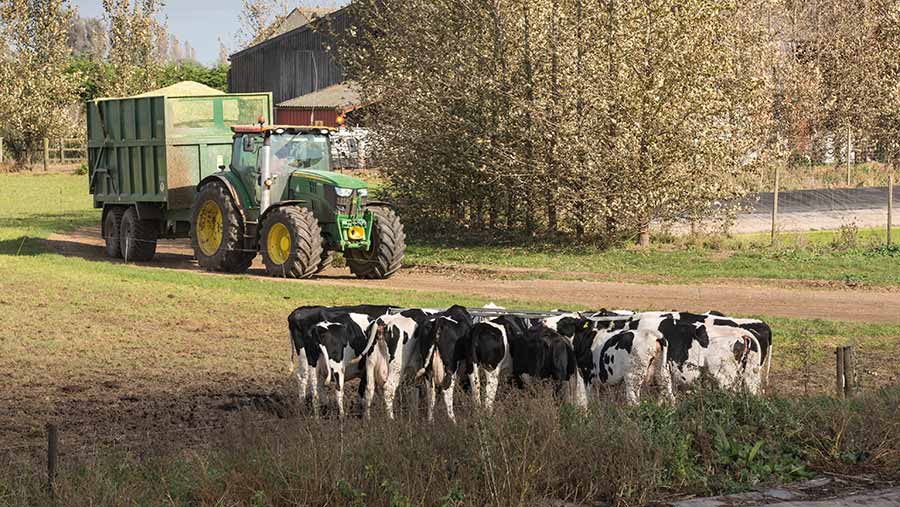 The maize harvest is moving fast through the main dairy areas, with growers in the West and the Midlands reporting strong yields.

See also: Why drilling maize deeper and later could be future trend

But some areas have had rain and, with harvest teams working flat out, growers need to be mindful of leaving mud on the road.

For fields that have seen rainfall, he advises running a tine through the soil to remove the compaction from the trailers if it is not possible to drill a cover crop.

The tines will allow rain to soak into the soil rather than running off the surface where it can pick up sediment and cause pollution in watercourses.

He adds that tines should only be set deep enough to pull out the trailer wheelings.

See also: Maize Watch: Why you shouldn’t leave bare stubble and what to plant

Mr Groom also points out that there is an opportunity to buy maize as a standing crop this year.

“Due to the wet spring a lot more maize has been grown so livestock farms could buy crops to build forage stocks,” he says.

Maize clamps well and will last for at least two years as long as fields are chopped at the correct time to ensure silage is 30-35% dry matter.

Mr Groom advocates using a drone to overfly maize to estimate yields before making a bid for a crop.

There is the opportunity of cutting this extra maize with a combine too and producing crimped maize for growers who can’t sell their standing crops, he says.

Use a picker header on the front of the combine and then the grains can be crimped and an additive applied before rolling in a narrow clamp or Ag Bag.

Crimped maize is typically 14.5ME and 70% starch so it works in the ration as a concentrate replacer rather than a forage, he says.

Chris Blake, sampling for Farmers Weekly near Crediton in Devon, was due to harvest in the week beginning 28 September.

“Maize has done really well for us this year and will replenish the forage stocks for the winter,” Mr Blake says.

He has grown Picker on heavy fields which has ripened early.

The crop’s condition is due in part to improved soil structure from organic matter in muck and slurry applications this year.

After harvest, half his maize fields will be drilled with winter wheat and the rest will grow a winter cover crop of Italian ryegrass before going back to maize in the spring.

“On suitable fields we will graze heifers early in the spring if the weather allows,” he says.

“The soil is still nice and warm and so the grass seeds will germinate quickly and start utilising soil nutrients and prevent erosion.”