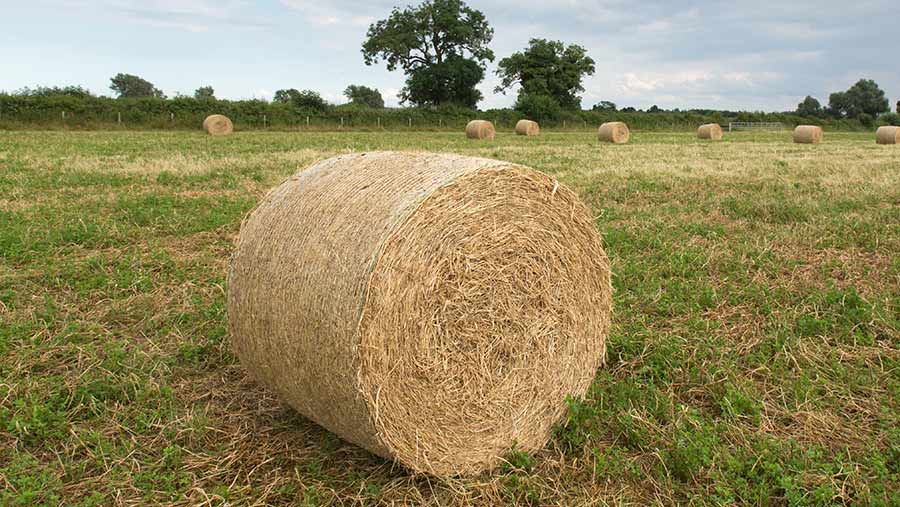 Lucerne is a deep-rooted, nitrogen-fixing crop that has seen a surge in interest among livestock farmers looking for a drought-tolerant fodder option.

Lucerne is a high-protein perennial legume with a crude protein content of about 18-20%.

It usually lasts four to five years and is predominantly used for silage or hay, with some aftermath grazing. It has an energy value of about 10-11ME and average dry matter yield of 15t/ha.

Why is it drought-tolerant?

Lucerne grows off a taproot that stores nutrients to help the plant regrow after it has been cut or grazed.

Like other legumes such as clover, peas and beans, there are nodules on its roots that contain nitrogen-fixing bacteria, so the crop needs no additional applied nitrogen (N) to grow.

There have been some reports of lucerne roots going down as far as 15m in search of water.

Where can you grow it?

Lucerne requires a free-draining soil with a pH of 6.2 or more. It does not tolerate heavy soils, waterlogging or acidity.

When can you grow it?

Lucerne should be established when the soils are warm and at a consistent 7-8C or above. It can be sown from the end of April until mid-August.

The crop is slow to establish in the first year, so later autumn sowing should be avoided, as it can lead to a patch establishment into winter. 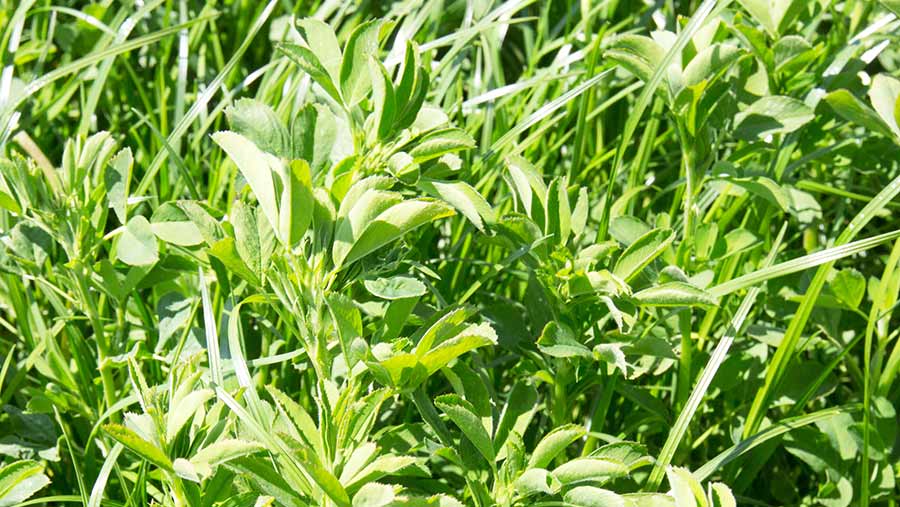 How do you grow it?

Undersowing can be a useful way to establish lucerne, as it means the field is not out of production while the crop establishes.

When undersowing, the general rule of thumb is to reduce the cereal component by one-third – for example, reducing the cereal rate from 187.5kg/ha to 125kg/ha – to give the lucerne seedlings space and light to develop.

Lucerne should be sown when soils are warm into a fine and firm seed-bed, no deeper than 1cm. Very small seeds can fail to emerge when sown too deep. Fields must be rolled before and after drilling to ensure good soil-to-seed contact.

Alternatively, it can be grown with non-aggressive grasses that will not outcompete the seedlings, such as Timothy or meadow fescue.

How much does it cost to grow?

Based on 2018 figures, a rough establishment cost per crop per year (over five years) would be £105/ha (see below for a cost breakdown).

How do you manage lucerne once it is established?

Lucerne requires no N once established, but it can be beneficial to apply 25kg N/ha to an autumn sowing to promote rapid plant development. P and K should be kept at Adas index 2 to maintain yields.

If it has been sown during midsummer, it’s unlikely there will be much to cut that year. A rotation of five years is recommended between lucerne crops, to reduce the likelihood of disease issues.

The crop should be cut to a stubble length of 10cm minimum.

When and how do you harvest?

In the first full harvest year, it should be ready for cutting in May/June at almost full flowering. Thereafter, cut at the bud stage, every five or six weeks. This provides the best balance between yield and forage quality.

After cutting, the crop must be wilted to a minimum dry matter content of 30% (40-50% if baling) to concentrate the sugar content.

Up to 70% of the protein and 90% of the minerals and vitamins in the plant reside in the leaf, so it is important to minimise leaf losses.

As the leaf dries out more quickly than the stem of the plant, overwilting or extensive handling can result in large amounts of leaf shatter.

The use of roller-type mower conditioners, which cut and condition the lucerne by crimping or crushing the stem, is advisable when harvesting. These will speed up the rate of moisture loss from the stem without extensive damage to the leaf.

How do you feed it?

Lucerne can be silaged as either bales or chopped and put into the clamp. It can then be fed as part of a ration with other silage, such as grass or maize. It can also be made into hay or haylage.

The high protein content of lucerne silages make it a good replacement for soya bean meal in diets. It is also a good complement to maize silage.

For ruminants, the lower readily available starch content and higher buffering capacity of lucerne compared with maize silage also has a beneficial effect on rumen pH.

The benefits of growing and feeding lucerne to dairy cows