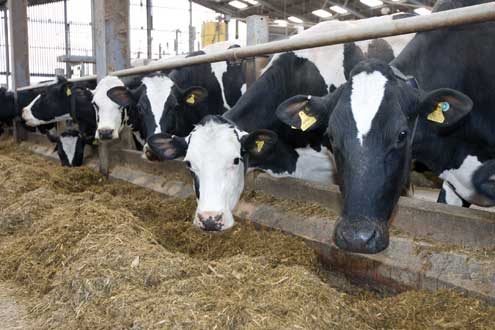 Farmers who maximise starch levels in intensive beef finishing rations have the ability to increase gross margins by up to £96 a head without any health issues, according to recent research.

Trials conducted by Harper Adams University College found dairy-bred bulls on a high starch ration had the highest feed conversion ratio and no signs of liver damage from acidosis. However, when 10%-20% of high-starch rolled barley was replaced with high-fibre soya hulls, a negative effect on cattle performance was seen.

Three rations were fed ad lib containing either 36%, 32% and 26% starch as fed. This was achieved by substituting barley with 0%, 10% and 20% of soya hulls respectively. All cattle had ad lib access to straw to prevent bloat and keep the rumen functioning.

“The results prove you need high levels of starch in the diet to maximise production, with optimum levels at 40-43% starch in DM,” says senior beef lecturer Simon Marsh.

Mr Marsh says there is no situation where feeding lower-starch quality and quantity is cost effective in intensive beef finishers, as it will affect all performance parameters. However, he can see why farmers would include other home-grown cereals, for example 10-20% oats or 40-50% non-ground wheat, either to save feed costs, for health reasons or to suit their type of farming system, but they should not expect to achieve the same feed conversion ratio.

“Cereals with high fibre cause deterioration in feed conversion ratios, but should be considered when there is a lack of straw or problems with acidosis, with long fibre inclusion at 5-10% of the diet when cattle are kept on slats.”

In order to minimise acidosis risk in high-starch diets, Mary Vickers, senior beef and sheep scientist at EBLEX, says cracking the grains rather than grinding them into very fine particles will help to reduce the speed of fermentation in the rumen. “In this study straw was also available to all cattle ad lib to provide a source of long structural fibre.”

However, Dr Vickers says soya hulls and other co-product feeds can be useful in cattle diets, particularly where a source of digestible fibre is required to slow down the fermentation rate in the rumen and reduce the risk of acidosis.

Dr Vickers advises farmers to request feedback from the abattoir on liver abscesses, which can indicate a problem with acidosis. “Acidosis can depress feed intake and performance, so it is worth trying to avoid in all cattle systems,” she adds.