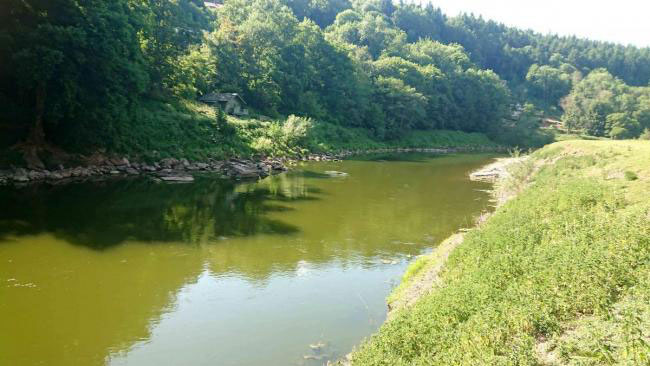 The ‘green’ Wye River at Redbrook © The Wye and Usk Foundation

Farm leaders in Wales have spoken of their anger and frustration after an environmental charity claimed poultry farmers were harming rivers.

NFU Cymru has contacted the Wye and Usk Foundation to raise its extreme frustration after the charity published a release claiming the pollution from free-range poultry farm is seriously damaging the River Wye.

The River Wye has “a sickly appearance, with its water resembling pea and, at other times, French onion soup”, it added.

Since the article was released, a tranche of damning articles in the national press have followed, pinpointing poultry farms in mid-Wales as the main reason for an increase in phosphates in the River Wye, contributing to an increase in algal blooms.

But Natural Resources Wales (NRW) said the recent algal blooms came at a time when river levels were close to the lowest ever recorded and following the sunniest May on record in the UK, which raised water temperatures. These are all factors that contribute to the development of algal blooms in rivers.

Proactive visits to poultry units have identified no serious issues. NRW also stated that long-term phosphate levels in the Wye catchment have been declining.

NFU Cymru said the “poor portrayal” of the industry has left farmers feeling scarred and hurt that an organisation with whom they have worked in partnership for many years on fencing off watercourses and other measures to enhance water quality could issue such a reckless and damaging statement.

Egg producer Gwyn Price said the foundation’s press notice was a “scathing attack” on the poultry sector, which would take a long time to recover from the damage.

“I, like many farmers I have spoken with, feel that trust, respect and confidence in this organisation is now undermined as a result of its gross misrepresentations of farming in mid-Wales,” he added.

“I think the public deserve to know factual information and as poultry producers we are highly regulated, monitored and routinely inspected.”

According to the Wye and Usk Foundation, 20 new free-range chicken sheds were approved for the area last year, and another 11 are under consideration for planning approval.

The foundation said NRW and Powys County Council have a “legal responsibility” to protect the river, but claimed they have been “apparently unwilling to use the existing laws to protect the river from the nation’s desire to eat more free-range eggs”.

It said that since 2008, the upper catchment now hosts an extra 10 million chickens, with the Ithon (one of the river’s tributaries in Powys) having the lion’s share.

It states: “This number of chickens produces large amounts of highly reactive phosphates from their manures, which find their way into the rivers.”