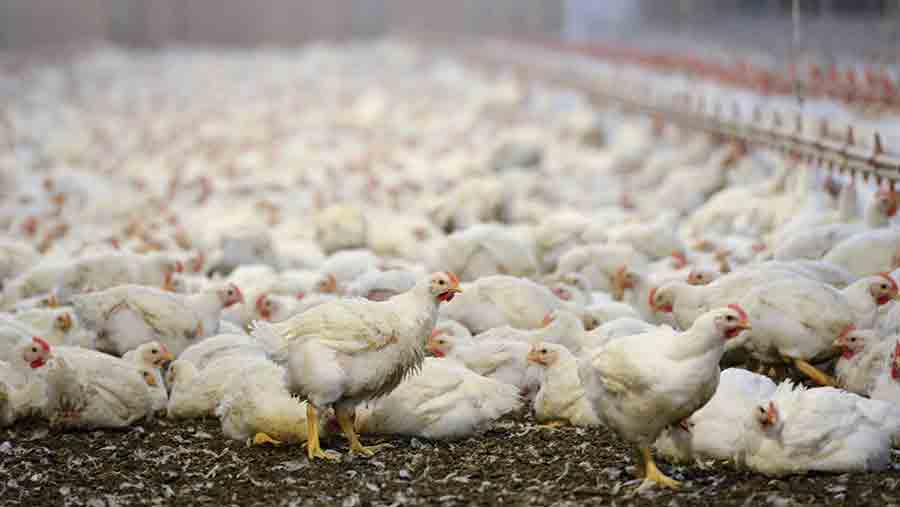 Farmer groups and opposition MPs are demanding that guarantees on import standards be written in to the Agriculture Bill currently going through parliament, amid concerns the government is prepared to let in substandard food under future trade deals.

The latest fears stem from comments made by Defra secretary George Eustice, who appeared on Sky News’ Sophie Ridge programme and the BBC’s The Andrew Marr Show over the weekend.

On both programmes, he failed to explicitly rule out the possibility of importing chlorine-washed chicken or hormone-treated beef in any future free-trade deal with the US.

“We’ve no plans to change those things,” he told Sophie Ridge.

Mr Eustice then explained that “chlorine washes on chicken are a very outdated technology and it is not really used by the US anymore”.

He then told the BBC that lactic washes were more the norm and suggested there was “room for a sensible discussion” on this as part of future trade talks.

But this has failed to satisfy UK farm groups, who are seeking a legal guarantee that imports of food produced using methods outlawed in the UK will be banned.

Tenant Farmers Association (TFA) chief executive George Dunn said: “There is a united voice across industry, environmental, animal welfare and consumer interest groups that our high production and marketing standards in food must be protected by statute.

“While the government is hiding behind the line that, for now, European standards have been incorporated into UK law, this can only be guaranteed until the end of our transition period with the EU in December of this year.”

Without a legislative commitment, the UK’s high domestic standards would be undermined by cheap imports.

But this could be avoided by a Labour Party amendment to the Agriculture Bill being considered in the House of Commons this week.

Shadow Defra secretary Luke Pollard, who has tabled one such amendment, said the sale of chlorinated chicken in the UK was a genuine risk, “unless this back door to lower standard US goods imports is closed and a ban is put into law”.

“With the Tories’ desperation for a trade deal with Donald Trump, it would appear they are rolling back on their promises,” he said.

Fact check on US poultry production

Defra secretary George Eustice is correct to say that chlorine washes are used less than other chemicals in US poultry production, but the real issue is why they are used at all, says British Poultry Council chief executive Richard Griffiths.

Currently, there are four chemicals used to control pathogens on US poultrymeat – chlorine dioxide, acidified sodium chlorite, trisodium phosphate and peroxyacids – and all four have long been approved by the European Food Safety Authority.

But, while chlorine has become the proxy for all these treatments, Mr Griffiths says it is the “cleaning it all up at the end” attitude that is the real problem.

“What the UK media should really be focusing on is animal welfare standards.

“In the US, this is left to a voluntary code of conduct, whereas in the UK, animal welfare is enshrined in law.”

For example, US poultry houses are only cleaned out once a year under their deep litter system, leading to a higher pathogen count and greater use of antibiotics, while in the UK, sheds are disinfected between each crop of birds.

Mr Griffiths says the words of successive Defra secretaries that standards will not slip as a result of future trade deals do not go far enough.

“These comments always come with caveats and it is clear we are on movable ground,” he said.

“I don’t believe food and farming is high on the government agenda when it comes to trade.

“Until it is enshrined in law, it is hard to believe the commitment behind the government’s words.”