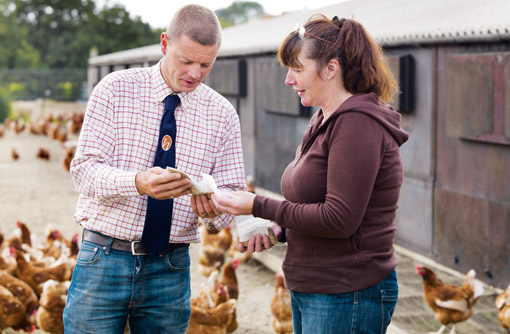 Despite the challenges presented by record rainfall this summer and an outbreak of E coli at Riverside Farm, the birds have performed well, putting on weight fast and coming into lay ahead of schedule.

“We knew that the first few weeks after the birds arrived here would be crucial to the success of the flock going forward,” says Linda Courtney. “We therefore spent a lot of time with them through May and into June, helping to ensure they settled in as quickly as possible.

“We are happy with the progress so far. The summer months have presented many challenges and we have had to use all our knowledge and experience. Additional help and advice from external experts has also been invaluable, and as a result we remain well on track.

“In particular, we are pleased with the bird’s bodyweight and the speed with which the flock came into lay. The egg quality is high and we have been successful at controlling egg size, initially increasing egg weight in a controlled manner and not putting too much pressure on the bird.”

“Good nutrition is crucial to ensure that the birds are at the required bodyweight throughout the various stages of the laying cycle,” he says. “I have worked with this flock from day one. We initially put the new pullets on to a high-specification starter diet, particularly relevant for the summer as the birds’ feed intake is naturally lower. But we did change the diet relatively quickly to a standard peak lay ration, because the birds reached the required bodyweight remarkably fast.”

Lighting is also a contributing factor to the early success of the flock.

“We have put the lighting hours forward,” says Mrs Courtney. “The birds are currently on 16 hours of light a day, and have been for a number of weeks. When a flock first arrives at the farm we tend to give 10 hours’ light a day, increasing by an hour each week once bodyweight reaches 1,500g. However, as this flock came from the rearer at the breed target weight, we started the birds on 12 hours and have subsequently increased to 16 hours.

“The birds have come into lay much quicker than previous flocks. On the one hand this is positive, because it means we are generating an income early. However, we have been holding egg size back to ensure long-term productivity – laying large or extra large eggs at such an early stage can put too much pressure on the bird. Indications for future productivity are positive; the birds are laying well now at 32 weeks so it will be interesting to see what they can do during peak lay at 60 weeks.”

The main challenges this flock has faced so far have been the wet summer and an outbreak of E coli. “I was called out by Linda when the birds were at 26 weeks,” says Mr Clout. “There had been a sudden reduction in egg size and an increase in mortality. I carried out an initial post mortem examination, which showed a white film covering the bird’s liver, suggesting an E coli infection. Linda and Ralph contacted their vet, the birds were sent off for final diagnosis, the right course of treatment identified and successfully implemented and the birds’ production bounced back.”

E coli infection can be particularly virulent, even though there is often little or no initial adverse effect on productivity.

“The post mortem clearly showed the bird had yolk sacs and ovaries ready for egg production over the next few days, suggesting it died very quickly,” says Mr Clout.

“The majority of producers would treat the birds based on advice from their vet. The cost to medicate is certainly worth considering in the current climate where losing 10-20 birds a week would be hugely damaging.”

As well as the disease challenge, this flock has been slower to range than previous ones.

“They prefer to stay close to the house, rather than be inquisitive and venture out,” says Mrs Courtney. “We keep horses on the farm and have sheep and old machinery on the range. It is important to reduce the stocking density in the shed during the day as it gives the house a rest and helps with ventilation.

“Both Ralph and I also believe in free range as a way of producing eggs and so for us bird welfare and encouraging use of the range is hugely important. The birds normally love the rain and splash about in puddles and eat any worms that have been flushed to the surface, so we don’t feel the weather has been a factor.

“The flock has been ranging better during the last few weeks. However, some flocks just don’t range. They are animals and there is bound to be variation. For me that is what makes them so fascinating.” 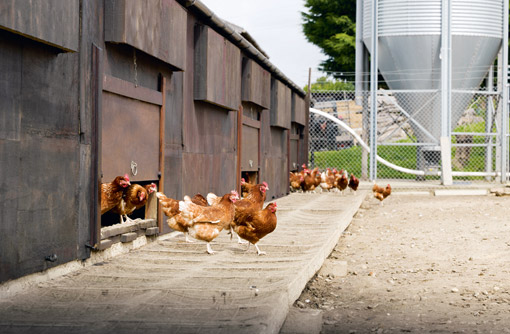 The wet summer has been hugely difficult for free-range farmers throughout the UK. “This year has been incredibly challenging for both producers and advisers,” says Mr Clout. “As an industry we need to constantly review and change the way we work, adapting to volatility from the weather and in the marketplace.

“During UK summers we are increasingly seeing huge amounts of rain in short time periods, with temperatures staying high. Advising producers on how to maintain productivity in such conditions is difficult.

“You have to gather as much information as possible, assess the situation and make a decision based on the facts and your experience.”

Wet summers result in increased worm burden, uncomfortable humidity in the poultry house and wet litter, which means reduced quality. At Riverside Farm they have laid slats by the pop holes to help clean and dry the birds’ feet as they re-enter from the range.

“I don’t want to wish the summer away,” concludes Mrs Courtney, “but it will be good to see the night’s drawing in and the birds going to bed earlier. Our focus remains on keeping the birds happy and healthy, controlling egg size and preparing and maintaining the farm ready for the impending autumn and winter months,” she adds.