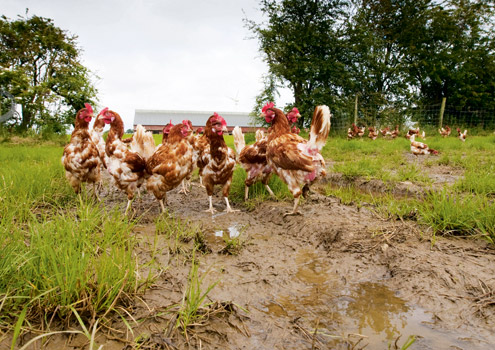 E coli is the most common bacteria found on UK poultry farms, so countering its influence is of strategic importance, as Philip Clarke reports

Keeping on top of E coli requires a multi-pronged approach focused on good management and, where necessary, the judicious use of medication.

According to Andrew Walker of the Slate Hall Veterinary Practice, E coli is the most common bacteria isolated from post-mortem submissions put through the company’s laboratory in Willingham, Cambridge. It is typically found in chicks during the first week and can lead to problems throughout the life of a flock including inferior performance, lack of uniformity and increased mortality.

“Most of the strains that we come across are fairly harmless. But some of the serotypes are pathogenic in poultry – known as Avian Pathogenic E coli, or APEC,” he told a recent Pfizer seminar.

“Infections can come about in two ways – either as a primary challenge, which will vary according to the serotype, or it may be secondary to other primary problems such as mycoplasmosis, respiratory viral challenges or immunosupression,” he said.

“It’s also a numbers game – the more E coli you throw at these birds, the more likely they are to go down with the challenge.”

Whichever the route of infection, there was no doubt that E coli came at quite a cost to the poultry sector, related to losses from mortality, but also the subclinical losses as the birds used up energy to fight infection.

In broiler breeders, the most common conditions associated with E coli included yolk sac infection and septicaemia, though birds could also suffer from swollen head syndrome, peritonitis and cellulitis associated with mating damage.

“The yolk sac is a perfect medium for bacteria to grow on. There is very little blood supply into the middle of the yolk sac, so if birds are fighting an active infection, they can’t get the immune system into the yolk sac,” said Mr Walker. “The bacteria also thrives in a medium that is designed to grow a chick, especially when put into an incubator.”

Effective control and prevention should focus on hygiene at every stage of the production system, including egg handling and water sanitation on the farm.

“It’s crucial to get an optimal chick start to ensure that immunity develops,” said Mr Walker. “That applies to the hatching stage and the brooding stage.

“It is essential that primary diseases are controlled, too – especially the immunosuppressive diseases, such as Marek’s or Gumboro, by both vaccination and biosecuity.”

Strategic medication, such as the use of antibiotics, was in decline – especially since the voluntary ban on cephalosporins. “It’s an area where we as an industry need to be a bit more reactive, especially in the first week, perhaps by using competitive exclusion products early on.”

Minimising other stresses was also crucial, in particular the control of other diseases at the onset of lay, and ensuring the correct mating ratios to minimise back scratch damage.

For layers, the neo-natal infections were much the same as for broiler breeders. “We tend to encounter a lot more injurious pecking in layers, so there is a lot more disease introduction via vent damage.”

Peritonitis was a common problem in layers linked to E coli. Things like incorrect beak treatment, excessive egg size, inadequate skeletal development and poor ventilation could all add to the stresses on the bird and predispose it to peritonitis. “Any ammonia levels will compromise the respiratory tract’s ability to stop E coli from colonising.”

It was especially important to minimise stresses coming into lay, by ensuring uniformity between the pullet rearing stage and transfer to the laying farm. “This can be through lighting intensity, nest box management and not stressing the birds when they are trying to lay an egg.”

Vaccination for E coli was another possibility. “They tend to come in two forms,” said Mr Walker. “There is the licensed inactivated E coli vaccine, which can be a double dose strategy, or there are quite a lot of emergency or autogenous vaccines being used, based on culture taken from site-specific E coli.”

Mr Walker hoped that the arrival of the new live vaccine from Pfizer would produce some good responses at farm level.

For broilers, Mr Walker said most of the issues tended to be around rejects. “We don’t necessarily see mortality associated with pericarditis, but there are potentially high rejects going into the processing plant.” Cellulitis and demartitis were often linked to back scratching, he added.

Mr Walker also outlined the list of antibiotics available to deal with E coli, but urged caution in their use.

“It is important to get the right antibiotic into the right tissue at the right concentration for the right period of time,” he said. “E coli has the potential to carry a resistant gene as part of its genetic coding, so they are a potential threat to the industry.”