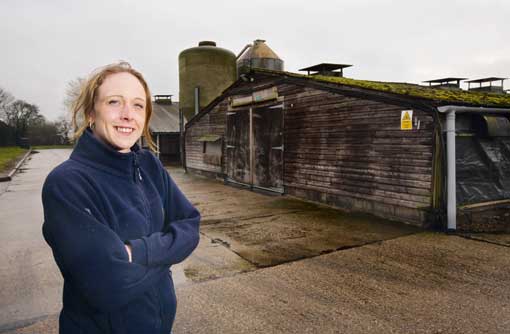 A success story for an industry with an ageing workforce, Rachel Almey, 27, grew up on a broiler farm. But it was while working in Vion’s processing plant that she grabbed an opportunity to move into farm management.

Her first birds came top of the region with an EPEF of 368, and she has consistently produced top scores ever since.

Miss Almey’s farm consists of seven sheds, the oldest of which were built in the 1960s and require continual maintenance and upgrading.

The birds are mainly grown for the Co-Op’s “Elmwood” line, which specifies a stocking density of no more than 30 birds/sq m, requires windows in sheds and range enrichments, such as hanging CDs and perches.

Growing high welfare broilers in older sheds “gives them a second lease of life,” according to Werner Strydom, Vion’s regional broiler manager. Rather than packing broilers into the houses, 25% fewer birds means 25% less strain on older machinery, heaters and fans.

The number of birds in the sheds ranges from around 6,000 in the oldest to 14,000 in the biggest. This presents a challenge for balancing feed distribution, but Miss Almey insists that it’s something she has simply “got used to”.

The older sheds use feed tracks, which are notoriously unreliable. Feed is dropped into a small, open trough, which runs around the entire shed. A track draws feed along and round, but breaks quite regularly.

This makes managing feed and wastage more difficult, says Miss Almey, while the sheds’ lack of tunnel ventilation makes keeping them cool in the summer an additional challenge.

Matthew Nicholls, regional production manager for Vion, explains that there is an ongoing maintenance plan at Laxfield. “Our in-house team will do what’s possible, but we have contractors as well.”

Alongside day-to-day repairs, there’s also a mid- and long-term plan for the site, which is ongoing. Recently, cracks in the flooring have been tarred over; leaking roofs and guttering replaced. Walls and ceilings are continually draft-proofed as best as possible.

“There’s still one of the sheds where we have the space and the height to put pan feeders in,” says Mr Nicholls. But others are limited by the space provided when they were built.

Miss Almey’s sheds are currently phasing out individual water pumps and header tanks. But, while fresh water now runs through a central pumphouse, water can still be standing in an individual shed for a long time before it reaches the birds.

“I tend to fill a header tank and then let it run out. With the water sitting there it can get bugs and things.

“I use acid, which balances the pH level of the water, and I think that has helped a lot with leg problems,” says Miss Almey. The region has very hard water, making limescale build-ups constant. Keeping the water pH correct limits the damage that it can cause.

The farm, she says, has little history of disease, but keeping it out of buildings that have more wood and are perhaps slightly less airtight than a modern equivalent is a challenge.

“The biggest problem with an older building is that you haven’t got smooth metal walls or flat concrete, but it’s still possible to do a good standard of cleaning, it just takes a bit more care,” explains Mr Nicholls.

Between cleans, Miss Almey says that maintaining high biosecurity is the best way to keep disease at bay. Small tricks are apparent, such as foot-baths which are always placed right in the doorway of a shed, so you can’t miss it as you walk in.

“I wash all control panels and disinfect them – even light switches and silly little things like that,” she says. Drinking water is also flushed at the end of a crop, and she says that the longer she can keep cleaning fluids in the system the better.

Keeping the site clear of rubbish is also important, she adds.

Miss Almey says that her attention to detail extends to meticulous record keeping, and she admits to taking this “over and above what other managers do”.

Proudly explaining her tricks for paper graphs on the walls to her sheds, she shows how cycles are split into three daily visits, and how she double checks all her figures before submitting them.

Miss Almey believes that her Ross 308’s high performance is down to attentive management and an eye to detail – despite the challenge of somewhat ancient buildings.