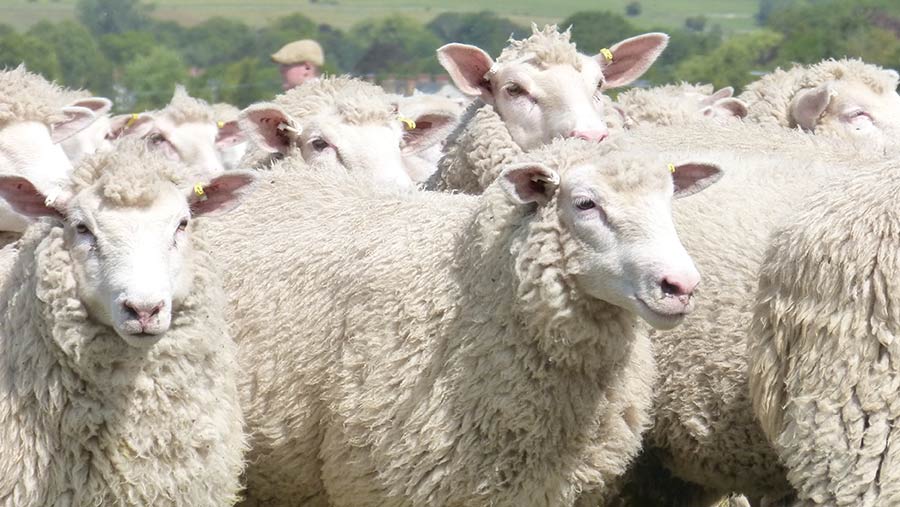 An early-lambing flock is achieving feed conversion rates of 2.5:1 and is selling 1.92 lambs per ewe. Michael Priestley visited Warborough Farm with the Nuffield Beef and Sheep Group to find out how.

Colostrum quality, stock skills and a milky and prolific crossbred ewe are allowing an Oxfordshire flock to sell 1.92 lambs per ewe in a housed finishing system.

All lambs at Warborough Farm, Letcombe Regis, spend their entire lives inside before being sent to deadweight processors from ten weeks of age.

By crossing Poll Dorset with Finnish Landrace after advice from Dr John Robinson at the University of Aberdeen in 1974, Mr Good developed the ‘Warborough’ breed (see box).

And while Mr Good concedes the strategy is reliant on the Easter lamb trade and bought-in feed, the system has served the farm well over the last 40 years.

“If you were to start sheep farming today, this probably wouldn’t be the route you’d choose,” explains Mr Good.

“However, it’s allowed us to manage the rest of the farm environmentally and it produces young, tender meat that has compared favourably in taste tests with salt marsh lamb.”

Ewes are bred in July through a synchronised artificial insemination programme undertaken by Mr Barber, which typically achieves 80% conception at first service, meaning 1,000-1,200 ewes lamb in December in two weeks. 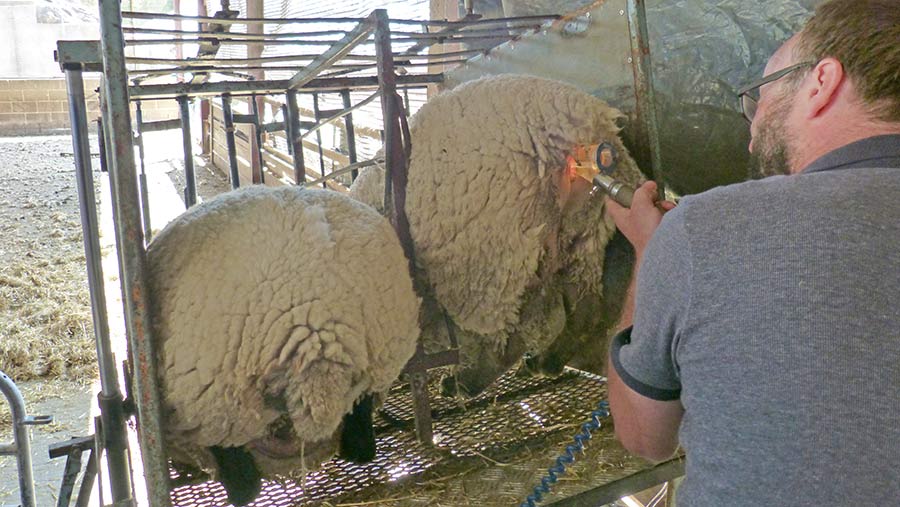 This is done to achieve a tight lambing window to hit early markets. They were rewarded with an average price of £105 for lambs sold in 2018.

Any ewes that return from the AI process after one service are mated to terminal sires to lamb in January.

Ewes are moved to individual pens as they lamb and are grouped after a maximum of 24 hours once lambs have been checked and had navals dipped twice in iodine and then moved to pens typically holding 66 ewes and 144 lambs.

Only potential replacements are tagged at birth and ram lambs remain entire.

No vaccinations or wormers are given to lambs and very little antibiotic is used. Some oral dosing is used later in the lambing shed on weaker looking lambs.

Cleanliness is ensured by topping up barley straw every day with a straw shredder. Barley straw is homegrown and from neighbouring arable farms.

Ewe Colostrum is frozen in 2 litre plastic bottles and fed to lambs from larger litters as needed.

“Colostrum is vital to get lambs off to a good start and minimise antibiotics,” says Mr Barber.

Lambs are creep-fed from seven days of age via a hopper and a trough topped up daily which can feed up to 200 lambs. All bought-in feed is made to bespoke requirements by GLW Feeds (see box).

Lambs are weaned at seven weeks old and then fed ad-lib pellets on the same double-sided hoppers, which are topped up every two days with about 75 lambs allocated per hopper. Barley straw bedding provides roughage.

Most lambs are usually sold in March and April, depending on Easter, with the last lambs sold in late May and early June at 20-21 weeks old.

Replacement ewe lambs are fed on concentrate the same way and introduced to grass in April and are bred in August.

This year’s farm records show a feed cost per lamb of £23.47, with 10 lambs finished per tonne of feed.

December lambers are housed in pens of 60-100-head and fed a total-mixed-ration (TMR) through a Keenan mixer wagon in the last two weeks of gestation and through lactation.

The ration consists of clamp silage, with brewers’ grains (24% crude protein, 11.7ME) added according to silage analysis to achieve a ration of 17.5% CP, 100g of soya meal per ewe and minerals.