More than a dozen sheep, including pregnant ewes, have had to be put down after a series of horrific dog attacks across Scotland this week.

Pregnant ewes at Earlshaugh, near Camptown, in the Scottish Borders, were attacked by an unattended dog loose among the flock for more than half an hour.

Two ewes are lucky to be alive after suffering serious facial injuries and the fate of more than 100 unborn lambs due in April now hangs in the balance after the incident near Jedburgh on Friday 2 March.

A 26-year-old woman has been charged over the sheep worrying and a report will be sent to the procurator fiscal.

A 47-year-old woman was charged following an incident in the Netherley area at around 11am in which a dog killed five sheep and injured several others.

A 24-year-old woman was charged following a second separate sheep worrying incident at around 12pm in the Stonehaven area. No sheep were killed but they were chased.

In another incident, ex-gamekeeper Andy Richardson posted a set of photos online showing the horrific aftermath of a dog attack in Inverary, Argyllshire, which led to 12 sheep being put down. 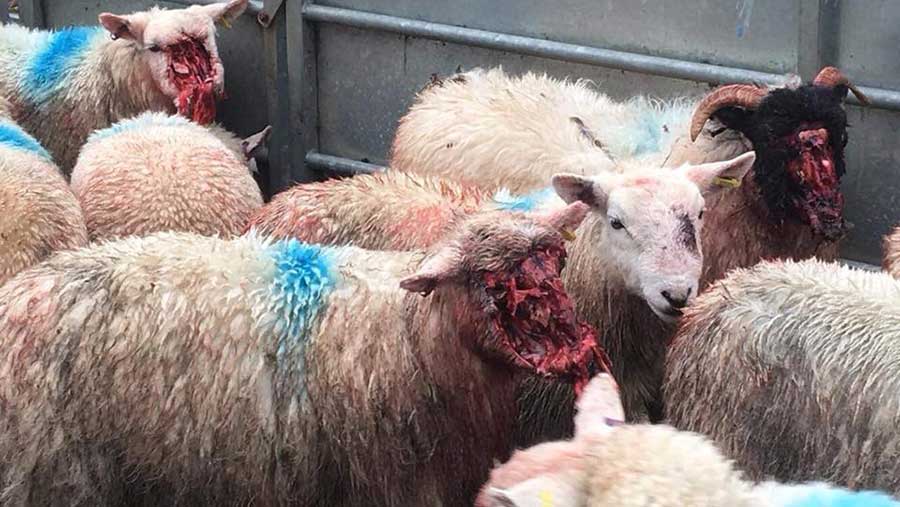 The Facebook post has had almost 6,000 shares and hundreds of comments from people calling for the dog’s owner to come forward and for such attacks to be stopped.

Mr Richardson said: “Sheep mauled, maimed and killed by at least one large dog. I would say more than one, possibly two-six and more involved. Photos taken while awaiting humane dispatch.”

Another pregnant ewe was attacked just over a week ago in the Windygates area in Fife, and the severity of the damage done to her face led to the vet putting her down.

NFU Scotland has said it is working with Police Scotland to try to stop these serious instances, which have become “far too frequent” over the past few years.

“As we are now into lambing, NFUS would remind the public that they should not take access in fields with very young lambs, but should find an alternative route.”

This month the NFU launched #takethelead to curb dog attacks by educating dog walkers about the need to use a lead near livestock and when in the countryside.