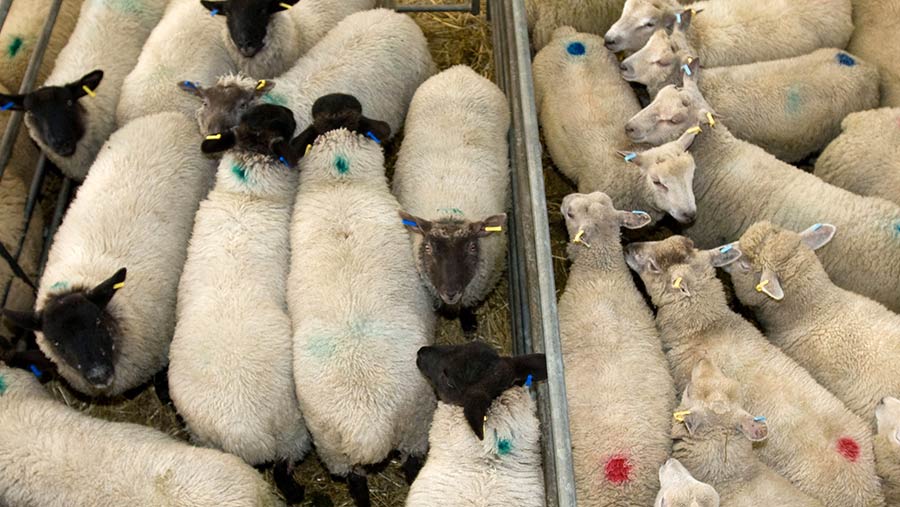 Store lamb prices are holding up despite smaller lambs starting to come forward and prime prices continuing to plateau.

Market prices for prime lambs are in the usual seasonal slump, dropping from 175p/kg to 161p/kg between late August and late September.

This took £6-£7 a head off finished animals and left values 8p/kg back on the year.

However, with auctioneers reporting that short and medium-keep lambs are close to fat price, indications are that the market is hopeful of a buoyant Christmas and new year trade.

Throughputs are well up on last year at Stirling United Auctions, and buyers have come forward in good numbers to keep store lamb prices firm.

Auctioneer George Purves told Farmers Weekly that early store lamb sales started £1-£2 a head dearer than the 2018 sales, but have since been very similar.

“People have to carry on farming, they know no more than they did this time last year with regards to what will or won’t happen with Brexit,” said Mr Purves.

He said short keep lambs have made up to £70, with the strong sheep upwards of £65 and more average stock achieving prices in the late £50s.

Trade for longer-keep lambs for Christmas and beyond has been at £45-£53 and sometimes £54 a head.

Numbers are also stronger at Bentham due to a combination of bringing in some new vendors and a conscious decision from some local farms to market all lambs before the Brexit date (31 October).

Some throughputs have been a couple of hundred head higher on the year, some fortnightly sales have seen almost 1,000-head more, auctioneer Greg MacDougall told Farmers Weekly.

“Some bigger finishers initially thought they’d hold off from buying until after October, but they have got involved earlier,” said Mr MacDougall. “Grass has helped demand, and it helped get lambs away in the summer.”