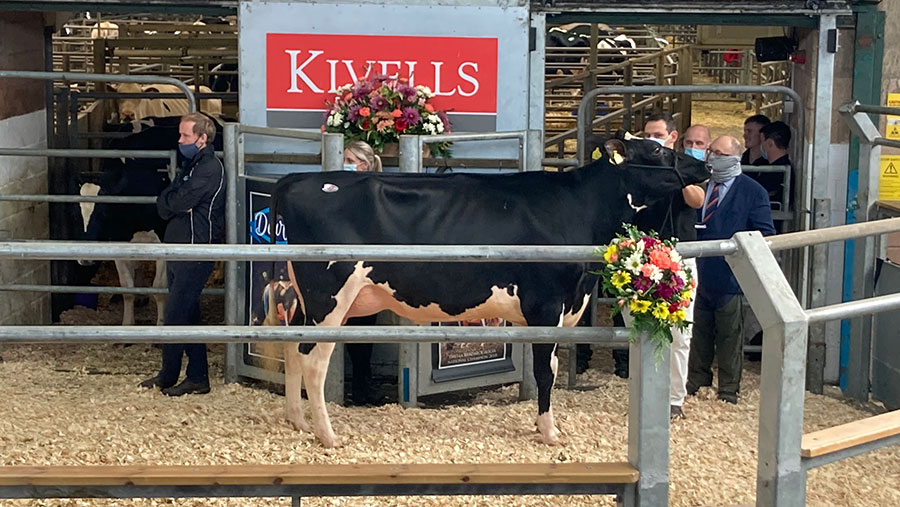 Feverish online bidding secured an average of 1,753gns at the Davlea production sale at Exeter on Monday (2 November), on behalf of Max Davies and family from Somerset, with almost 3,000 people watching the sale.

Top price of 6,500gns was paid for Davlea Abbott Pledge VG86-2yr (PLI +£389), a fresh heifer by Willsbro Abbott, who is descended from the noted Ada family that provided top price at the recent sale for Wills Brothers. Successful bidder was Martin O’Sullivan of Desmond Farms in County Limerick.

Gareth Thomas, Carmarthen, snapped up the in-calf heifer Davlea Control Shadow for 3,200gns. She is by JK Eder-I Control and is bred from 12 generations of EX/VG cows. Shadow is due to calve in January.

At the same money was the six-month-old heifer calf Davlea Sidekick Little, bred from four generations of excellent dams and a maternal sister to Jacobs Lauthority Loana ET (Ex-97-3E), which was grand champion at the World Dairy Expo in 2018. She also headed across the water to Ireland with Mr O’Sullivan.