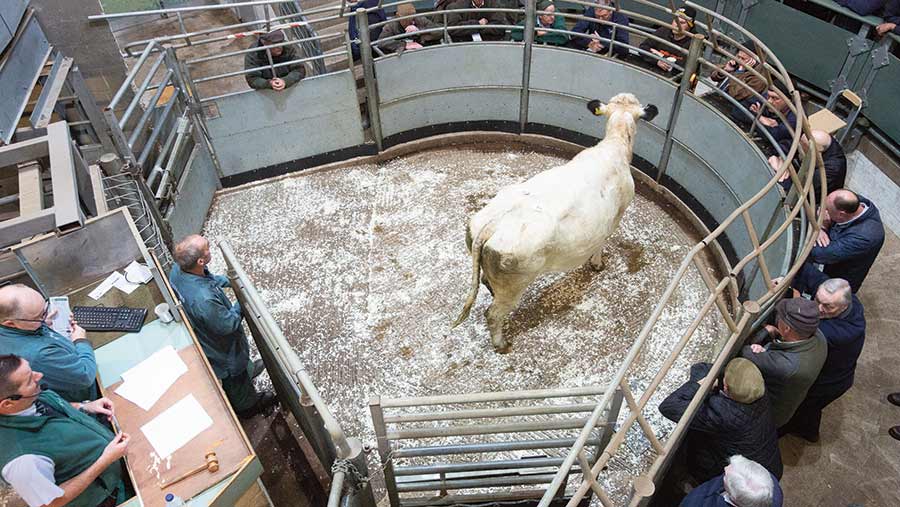 Cull cow prices came under pressure in May and June for the first time since the start of the year.

Great British liveweight averages lifted 23p/kg between January and early May to sit around the 120p/kg mark but national averages have fallen since.

Pressure has come from some big numbers being sent to processors, with deadweight cow supplies 10.3% higher on the year over the past five weeks.

Prices are relatively firm in Somerset and certainly far from disastrous, according to Mark Northcott, director at Frome Livestock Auctioneers.

Poorer Jersey-cross cows were at times making only 40p/kg, but the better Friesians and Holstein-Friesians were making 110-120p/kg.

“Last year the cow trade was buzzing, this year it is not,” he said.

“I personally thought the cow trade would be stronger and fewer cows would be about. I don’t think trade will lift a great deal unless we see an upsurge in exports.”

Cull cow numbers were tighter in April and May at Dumfries but have been building over the past couple of weeks to the usual 50 to 100 head a week.

Prices have “risen and steadied” this year, according to auctioneer Harry Begg of C and D auction marts, with 90-95% of beef cows now making more than 100p/kg and even 70-80% of the dairy cows making 100p/kg or more.

“Some of the plainer cows are as easily sold as the best cows,” he said.

The very best end of the dairy animals have been making 120-130p/kg if they are carrying flesh and only 35-40 months old. The lowest dairy prices generally start at 70p/kg.

Mr Begg said there was less interest from Irish buyers this year and that the struggling prime beef price was another negative factor.