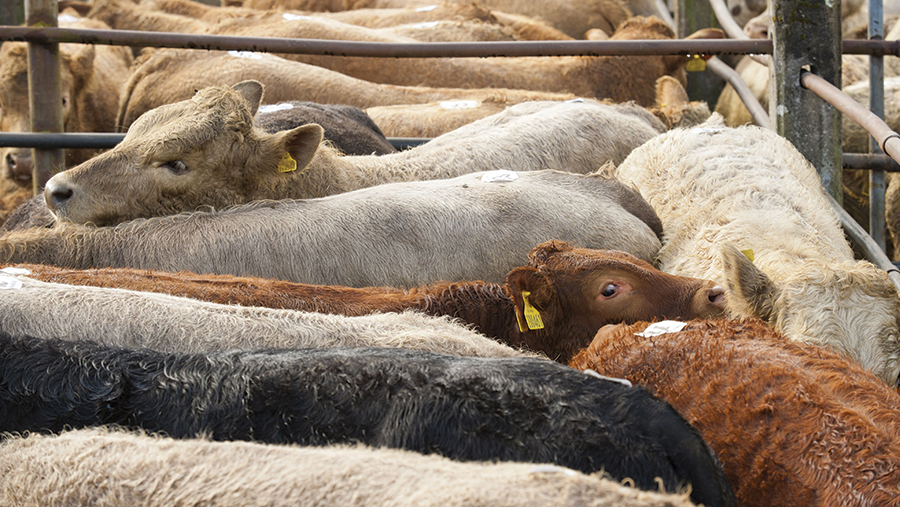 Store cattle prices have largely recovered from the mid-summer blip, although mart averages are being held back by second-quality entries, showing the effects of a challenging summer.

A deadweight beef price crash of 17p/kg in six weeks led to caution among finishers, although marts are now suggesting that much of the drop has been recovered in August.

This is certainly the case at Sedgemoor, where Saturday’s trade (1 September) was described by Greenslade Taylor Hunt’s Robert Venner as “more like a first of April trade”.

A yarding of 763 cattle in Sedgemoor’s 400kg+ ring saw another stronger sale, driven by a 20p/kg lift in the prime beef ring over the last three weeks, which has seen strong cattle back up to 230p/kg and run-of-the-mill heifers at 180p/kg.

All summer, Mr Venner has been advising farmers to supplement grazing, with the message now being to sell cattle soon, rather than holding on to them for the sake of it.

He said there were some really good stores about, but that a significant number were, understandably, small for their age.

Prices for strong, short-keep cattle are “improving all the time”, but Mark Richardson, livestock manager and auctioneer for Harrison and Hetherington at Kirkby Stephen, said the stronger trade of late is only for the right cattle.

Along with his colleagues at Carlisle, they have observed a “two-tier trade” open up, with longer-keep cattle requiring more forage well adrift of the better end.

“Forage stocks are a little tighter and some finishers have the option of selling their grain for more money this year,” said Mr Richardson.

“Looking forward, people are predicting cattle are going to be short, so that should send the price the right way.”

Mr Richardson added that the ever-increasing scrutiny of cattle health and vaccination programmes was evident at sales, particularly from Scottish buyers, owing to BVD rules.

“Without BVD accreditation you cut Scottish buyers out,” he explained. “This is because some of our better store heifers go for breeding, adding hundreds to the price tag.

“Our catalogues have more and more vendors registering with BVDFree England or marketing their stock as being tested and vaccinated.”