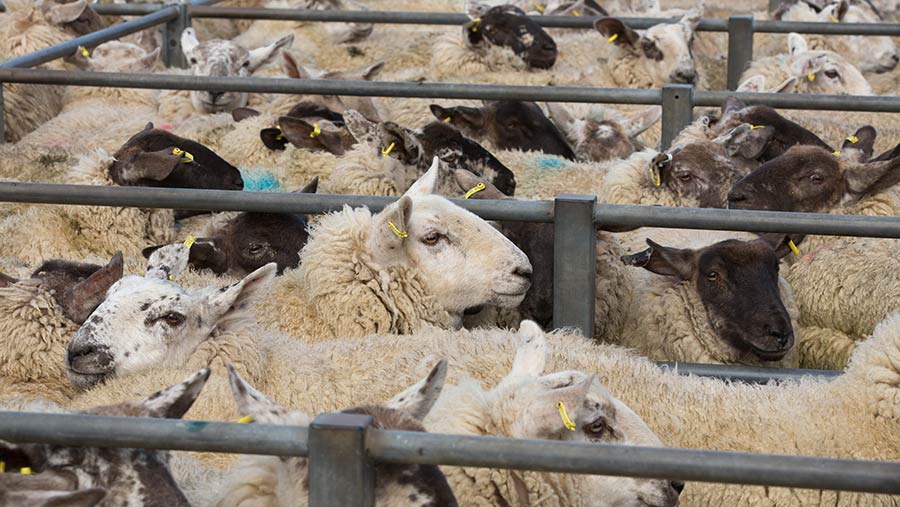 Prime lamb values have recovered lost ground to sit at a Great Britain average of 274p/kg on Monday (8 February).

The AHDB has predicted a 7% fall in UK lamb production between January and May due to a smaller carryover of lambs resulting from Brexit-cautious slaughtering before Christmas.

“We have seen some farmers cashing in ewe hoggs,” said sheep auctioneer Ed Harris of Lodge and Thomas. “In previous years this has led to fewer shearling breeders in the summer sales. We could see this push the breeding ewe prices.”

He said in-lamb commercial ewes had made £50 a unit more than last year. The only issue was that lighter and plainer hoggs were now coming forward as the tail-enders started to be drawn, he added.

After very high throughputs in December, Russell Steer of Kivells has been amazed at the volumes of hoggs farmers have been able to find.

“I thought we’d be quiet this year,” said Mr Steer. “Where are sheep coming from? Perhaps people are choosing to cash sheep initially kept back as breeders because of strong trade and all the wet and clashy weather we’ve had.”

He said confidence was sky high, with couples trading for £5-£8 a life more than last year recently and £10 more for much of the winter.

Some producers are starting to consider cashing empty hoggs and shearlings in Yorkshire, according to Ted Ogden of Craven Cattle Marts.

Mr Ogden said wintry weather had prevented some vendors getting sheep gathered and sold, but that he expected a bigger (2,500-3,000-head) entry next week (15 February).

He said all classes of lambs were selling well, but the 32-34kg Swaledale wether lambs at 240p/kg had seen very strong demand recently.