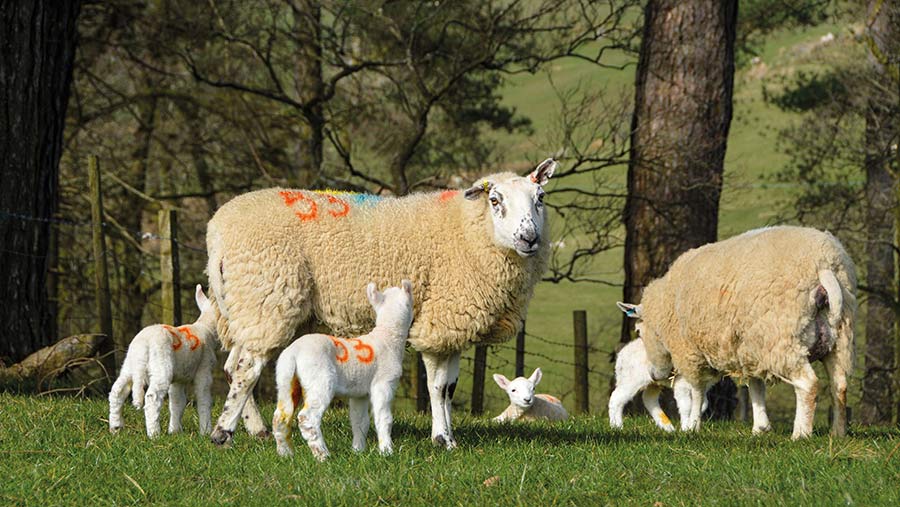 Market bidding and strong prime sheep prices have meant calls of £100 a life have been common this spring for well-built sheep with strong lambs.

Trade has tracked £15 a life up on this time last year, with prices buoyed by heavy prime hoggs at £140 a head and three years of national flock contraction, which has improved returns.

See also: Fertiliser plans need care with grass growth back up to 50%

However, comparisons with last year’s figures for late March and April are difficult, because the first Covid-19 lockdown forced breeding sales to stop, meaning outfits became hard to value without a competitive auction ring.

Numbers are 10-20% down on the year at Sedgemoor, where Greenslade Taylor Hunt’s Tom Mellor has seen prices 20-25% higher. He said last year’s strong prices were taking their toll.

“Buyers were used to paying £90-£100 for a good lowland ewe in the summer sales, but last year they were £100-£135, which put people off buying sheep to sell with lambs in the spring,” he told Farmers Weekly.

He said several regular vendors of couples were bringing a fortnightly trailer load instead of a weekly load.

Trade has been strong, reflecting the buoyant hogg and new-season lamb trade at Carlisle, but buyers are understandably a little nervous.

This is according to Harrison and Hetherington’s breeding sheep auctioneer David Fearon, who said many buyers were questioning whether this was the top of the market.

“People have been understandably nervous paying the money as it’s difficult to know if the trade is going to hold,” Mr Fearon told Farmers Weekly.

“Buying at £100 a life is a big initial outlay but buying younger lambs and older sheep at £70 a life will see you selling lambs in the late summer glut when prices are normally lower.”

He said large sheep with older, four- to six-week-old lambs had regularly made £20 a life more than a year ago.