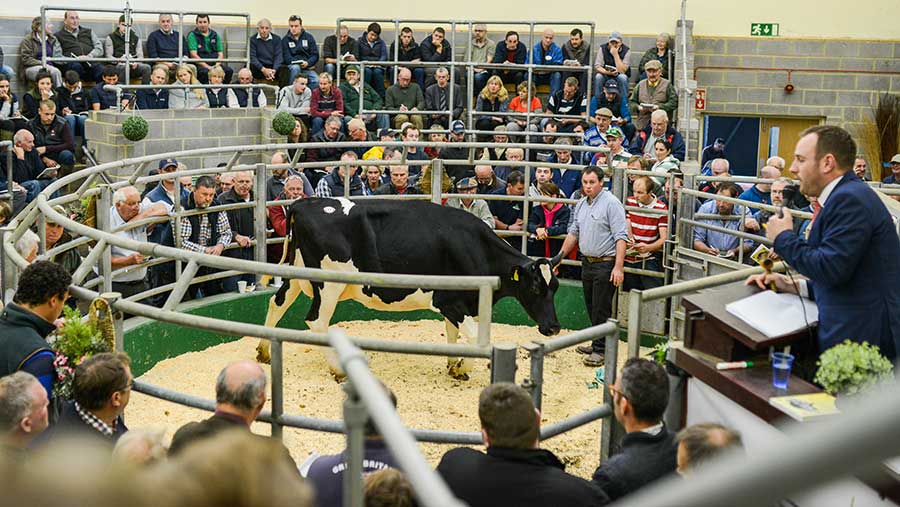 A flying trade saw the famous Oakroyal herd bow out in style at Sedgemoor on Tuesday (25 September) as two 5,600gns calls and an in-calf heifer average of £2,109 were hit.

The herd had been producing at 3.91% fat and 3.07 protein and sold with cows in calf to Unix, Silver, Goldchip and Mogul.

A total of 79 milkers were sold, including 30EX, 32VG and 4GP lots. They had been grazed through the summer and cubicle housed in winter.

Topping trade were Oakroyal Camelot Promis (pictured above) which was due to dry off in-calf to Unix. She caught the eye of Irish buyer J Richardson. She is by Larcrest Camelot and gave 7,392kg at 4,65% fat and 3.45% protein.

Matching this was Oakroyal Mogul Peach 54, an in-calf heifer also due to Unix this autumn. She joined the Barmick herd of MR and BJ Hollins and Son, Staffordshire. The 13 Peach cows averaged £2,610 on the day, with four above 3,000gns.

Next at 5,000gns was Sahara McCutchen Bashful (EX90), which was knocked down to Mick Gould, Woodmarsh herd. She was bought as a calf from Sahara and goes back to the Regancrest Barbie family.

Also of note was Oakroyal McCutchen Fesca (VG87) at 4,500gns, which sold to EK and M Burnell and Sons of the Boohay herd. She is by De-Su BKM McCutchen. Her dam averaged 11,377kg over three lactations.

Another from the McCutchen family sold to Chave and Sons Peacehay herd for 3,400gns. Elsewhere, the Peach family achieved further big money, selling to 3,100gns twice and 3,000gns twice.