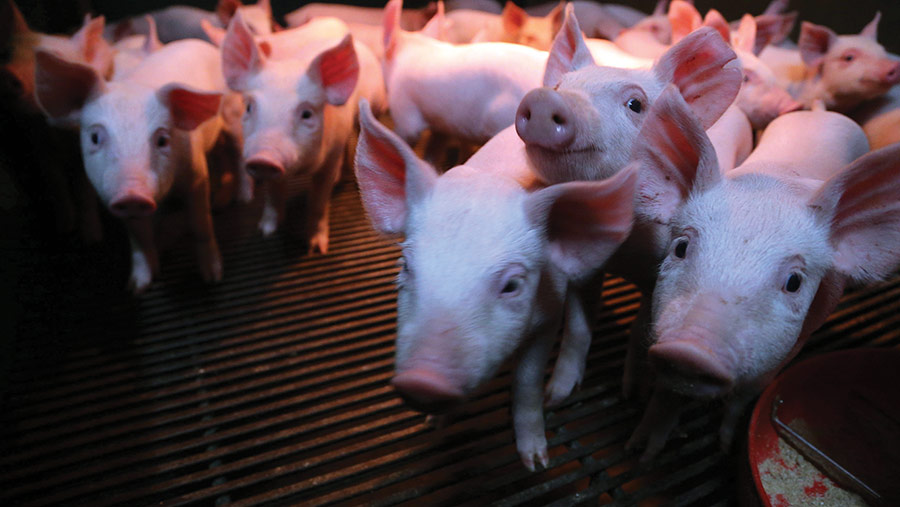 Weaned and store pig prices have been under pressure in recent weeks as pig farms get clobbered by rising input costs and falling returns.

Breeding units face rock-bottom sow values and finishers have seen the standard pig price drop 20p/kg since the summer to about 140p/kg.

Covid-19 has spread among abattoir and processing plant staff, which has limited capacity and created a backlog across Europe. This has been exacerbated by China’s September ban on German pork over concerns about African swine fever.

Profitability has been wiped out across Europe, with Dutch and Polish farms receiving 100p/kg for finished pigs as abattoirs work through the supply backlog.

Will Wallis, pig auctioneer at Frome, said times were “very difficult”, with a matrix of factors combining to put pressure on the pig market.

He added that limited demand for cull sows had forced farms to breed older pigs again, meaning more gilts had come on to the market as stores and finishers.

There had also been a rise in the number of overweight pigs, with some units holding on to animals in the hope of prices improving.

“There’s been some really fat pigs at 120-140kg,” he said. “At that weight the end market is very limited; processing, sausages and pies are all it could be used for.

“Cull sows were making £200-£300 a head last year – now only the best sows might make £150. I’ve not been asking farmers to send cull sows as there’s currently such little demand.”

He said it appeared that some farm shops and butchers were not as buoyed by the third lockdown as they were in the spring, and cheap, imported meat was driving down the domestic price.

Auctioneer Richard Haigh said liveweight finished prices held up reasonably well into December but were now back £20-£30 a head.

Selby’s store pig trade had held up reasonably well, with buyers remaining hopeful of the market picking up soon.

He said: “The store prices are back a little but they are selling better than the fat pigs.”