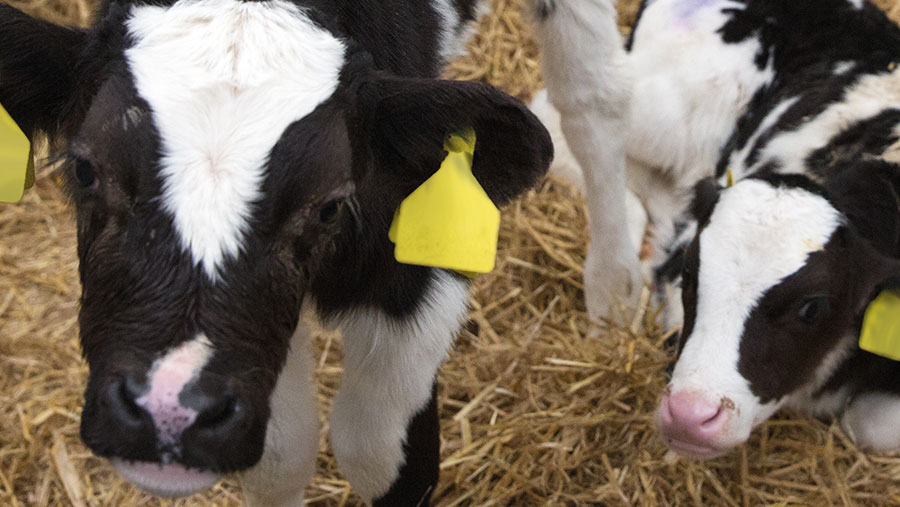 Marts have seen more vendors marketing calves through the live ring since a £40-a-head spring lift in trade has seen private buyers unable to give the true value.

Auctioneers say some farms have switched back to live rings after using collection centres or, understandably, staying at home, during the pandemic.

Calf trade started out in May at £294 for continental-cross bulls and £174 for Hereford-cross bulls under 42 days of age, according to AHDB data.

A few new faces were seen at Skipton’s Monday (17 May) calf sale.

Auctioneer Kyle Hawksworth of Craven Cattle Marts said: “Calves have been hard to source at times as a lot of vendors have stayed at home over the past year due to Covid.

“Demand for dairy-cross cattle is good. Some people seem to be selling suckler cows and opting for this instead.”

Continental-cross calves at five to six weeks old out of Holstein-Friesians had sold for £380-£465.

Only continental calves out of crossbred, New Zealand-type or Jersey cows, and only animals out of a Jersey cow, were typically failing to hit £200.

Trade had easily lifted £30-£40 a head for all breeds in the past month, he added.

A large entry of 676 rearing calves (all under 42 days of age) was very easy to sell at Drayton last week (12 May), with demand taking a seasonal surge.

Barber’s weanling and calf auctioneer Jonty Cliffe said demand had increased as lambing sheds emptied and people got out to fill sheds with calves before first cut.

“Lots of farmers that have been selling privately for the past few years have turned back to live markets. We’ve seen some new faces,” he said.

“The lift in beef prices has made young calves hard to value. People could quite easily be up to £100 a head out.”

He added that some vendors had put a bit more milk in calves and kept them another week due to the strong prices they were seeing.

“Not long ago those heifer prices were what the bulls were making.”