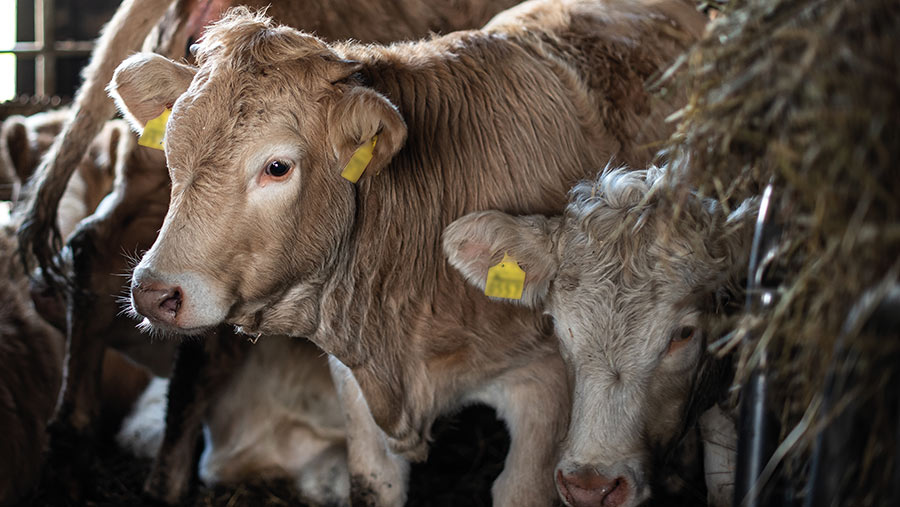 Calf averages have been propelled beyond £3/kg at times by deadweight beef base prices around 420p/kg and liveweight calls of £1,800-£2,000 for prime cattle in the live ring.

But escalating costs going into winter have made some buyers cautious, creating a two-tier trade at times with some cattle looking “well bought”.

“People are coming to the sales having sold cattle for a good trade,” said Mr Evans. “The market is rising, and the last cattle purchased look well bought, as finished cattle are making £2,000 a head. This is why we are seeing £3/kg for calves.”

Mr Evans said an entry of 140 E- and U-grade-type pure Limousin and Limousin-cross British Blue steer and heifer calves from one farm levelled at 320p/kg.

Auctioneers and vendors were a little disappointed by trade at the Exmoor Suckled Calf Rearers Association sale, which reported an average of 247p/kg (unchanged on the year) for steers and 215p/kg (down 7p/kg) for heifers (1-2 November).

Steer trade was solid, but heifer trade was flat said auctioneers Peter Huntley and Gethin Rees. Numbers were up 18.4% on the year at 1,325-head.

Charolais and Limousin steers under 300kg liveweight with good shape made about 280p/kg and heifers topped at 302p/kg.

Older store cattle (15-24 months) have been in greater demand at Hereford in recent weeks following increased demand from finishers who have now caught up with field work.

This has put £80-£100 on the best yarding cattle, said auctioneer Greg Christopher.

11.4%
How much higher Great Britain’s steer deadweight average was up on the year at 410p/kg (AHDB)