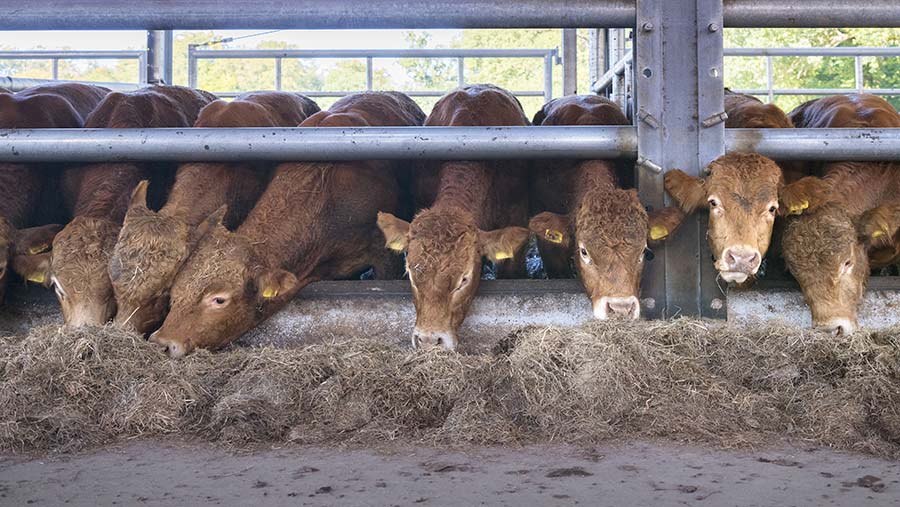 Aggressive sourcing from processors has led to swings of 10-12p/kg in deadweight beef prices, leaving North of England finishers ahead of the Scots on price.

Some large northern finishers have been offered 435p/kg this week, a lift of 10p/kg on the week.

However, grading and payment schemes can be as important as headline prices, so beef may be sent elsewhere, even with some prices falling 2-5p/kg this week.

Latest figures (week ending 25 September) showed an R4L at 422p/kg in Northern England, versus 421.4p/kg in Scotland. Typically, there is normally clear daylight between Scottish prices and the rest.

Parity across the border was first reached last year in lockdown as UK holidaymakers stayed at home and food service business evaporated, driving demand for domestic beef rather than imports.

National Beef Association chief executive Neil Shand told Farmers Weekly that Asda was on course to join the list of supermarkets sourcing 100% of its fresh beef from within Britain.

The retail giant’s pledge comes into force for the final quarter of this year, creating more demand for British beef at the start of October.

Mr Shand commended Asda for transforming its sourcing policy in 12 months. “During lockdown Asda was under fire for sourcing Polish beef,” he said. “But six months later, they pledge to source fresh British beef and a year on from that the commitment is honoured.”

Deadweight base prices may be strong, but Acklington’s auctioneer and mart manager Andrew Armstrong stresses that liveweight R-grade cattle making upwards of 430p/kg are commonplace in Northumberland.

“The best cattle make the equivalent of £4.50/kg or more here,” said Mr Armstrong. “It could be the abattoir staff shortages are limiting supply into the supermarkets, keeping the price higher.”

But he warned that the “autumn glut” of cattle could come forward, swelling entries at some marts by 40% for two or three weeks from late October into November.

Martin Lloyd, prime cattle auctioneer at Melton Mowbray, said a few more cattle may be around later in October, but he played down any major rise in supply.

“I don’t think they’ll come forward like in previous years,” said Mr Lloyd. “Cattle numbers are so tight – things are sold as soon as they are ready.”

He said a local abattoir was so short-staffed it was only contract kills forcing it to keep going. “They say it would be easier to buy the beef in as they can’t get the staff.”