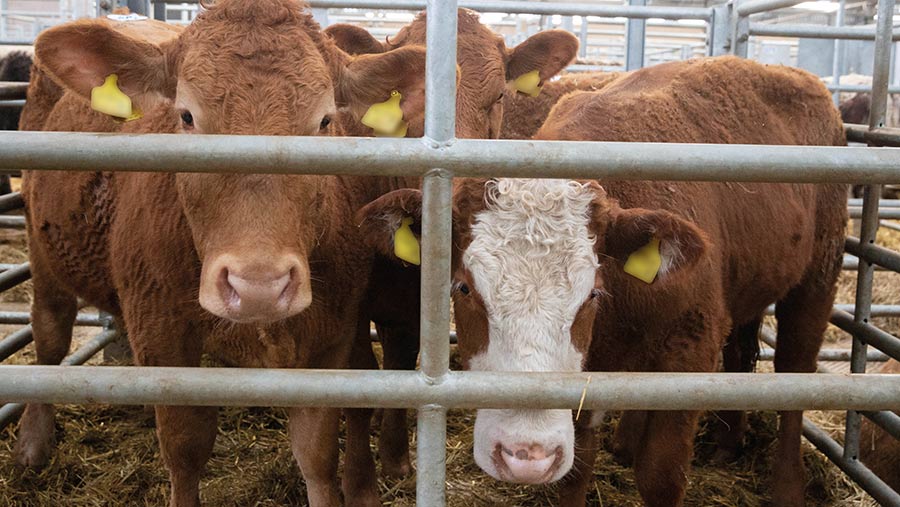 Several English meat buyers have lifted base prices above £4/kg for continental cattle this week, meaning red-hot summer prices in the store ring.

Industry expectations are for tighter cattle numbers and higher prices in early July, with some talking about prices surpassing the May peak, when the GB deadweight steer price hit 408.2p/kg.

Whether this happens remains to be seen, and finisher margins remain razor-thin.

Last week, and over the weekend, many markets saw short-keep stores up £40-£50 a head to wipe out any of the 5-10p/kg gain seen on the deadweight carcass.

A rising beef trade and tight store numbers have made for “tremendous” cattle prices at Sedgemoor over the past two Saturdays.

Numbers usually average 650-700 head at this time of year, but the market has sold about 500 in recent weeks.

“Numbers are very tight all round,” said Robert Venner of Greenslade Taylor Hunt. “If I had some stores for the traditional autumn sales, I would be very tempted to hedge my bets and sell some now. This trade is too good to miss.”

Mr Venner said many suckler farmers doing a good job had been rewarded with £1,200-£1,350 a head for yearling calves. However, he said prices like that were limiting opportunities for finishers.

The midsummer period had been phenomenal for grass growth, he said, with some big silage crops taken and some farms struggling to keep on top of the growth.

A red-hot trade was seen for 120 store cattle at Thame market on Friday (25 June).

Short-keep, continental, suckler-bred store cattle were £40 dearer on the week, while the dairy cross animals – sired by Angus and Limousin – were nearer £100 sharper.

This was for an entry of cattle boasting some very shapely 24-25-month-old Limousin cross bullocks that made £1,500 apiece.

Auctioneer Simon Draper said it was as good a sale as he had seen at Thame all spring.